The 1.6-litre diesel engine is shortly being withdrawn from the Berlingo line-up. James Dallas assesses whether it will be missed 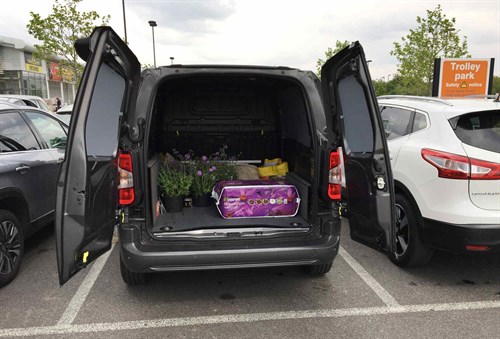 The Berlingo is an impressive load-lugger

Our Berlingo’s brief three-month stint on our long term fleet has drawn to its close.

While What Van? puts most of its long-termers through their paces for a six-month period it is perhaps appropriate that the 1.6-litre van is with us for a shorter time because, come September, due to incoming emissions legislation Citroen will replace the powertrain entirely with the newer and superior 1.5-litre engine that is currently marketed alongside it.

A 1.2-litre Puretech petrol engine with 110hp and 130hp outputs will also join the line-up.

While the new engine line-up will undoubtedly represent a step up, the 1.6 itself is none too shabby. It has served me well in covering a variety of routes, including busy London streets, A and B roads, and longer treks along motorways. I’ve never felt shortchanged by the 100hp on tap and my only gripe would be the lack of a sixth gear, which the engine seems to strain for, when cruising at higher speeds.

Manual derivatives of the 1.5-litre engine, it’s good to see, come with a six-speed gearbox.
Over the past couple of weekends I’ve put the Berlingo hard to work carrying bags of heavy planting compost and potted flowers back from a garden centre. Asymmetric twin barn rear doors plus a sliding door on the passenger side help with loading, as does ground clearance of 145mm in the Enterprise model.

The weight of hauling the loads undoubtedly proved far more troublesome for my back than for the van’s class-leading payload of 1,050kg, and nor was the load volume of 3.3m3 in the standard M-wheelbase van challenged. The load box is well protected throughout by ply-lining.

If you do require more space, however, then a handy hatch can be opened in the bulkhead to allow access to the cab. The outside passenger seat can then be folded flat to increase the load volume to 3.8m3 while also adding half a metre to the load length for long items such as pipes.

My Berlingo was equipped with a comprehensive set of sensors all around the vehicle’s exterior as part of the Surround Rear Vision package, but if you do need to squeeze into tight spaces then body-coloured side rubbing strips provide added protection.

The van’s cabin is spacious enough and finished in a businesslike if somewhat sober fashion.
The middle seat is not ideal for a passenger due to the intrusion of the gear stick housing, but a push button parking brake that releases automatically when a gear is engaged does make it easier to clamber from one side of the cab to the other without having to hop over a handbrake. Lift up the middle seat base and you find a discreet storage compartment.

There is also an overhead shelf, bins in the doors and two cupholders but no glovebox. There is, however, a useful covered tray on the dash in front of the driver and another storage box in the centre of the dash. This is tricky to reach though, as it sits behind the otherwise well-positioned satnav/infotainment screen. Pairing a smartphone is a simple process and, once done, the Bluetooth service works efficiently.