Well, that’s six months that have flown by, which suggests that Tony Rock must have been having fun with our long-term medium van, right? 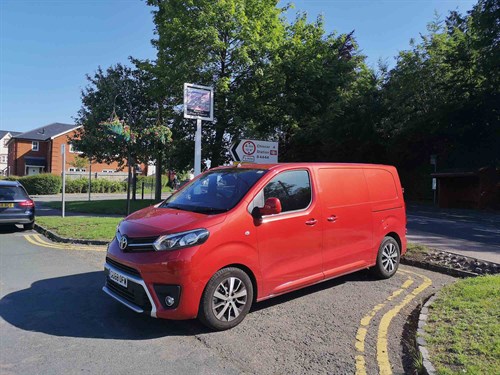 As the holder of Highly Commended status in the medium van category of the What Van? Awards and a former winner of the prize, expectations were high when the Proace took up a long-term position on the magazine’s fleet.

Our version was powered by a 180hp 2.0-litre Euro6 diesel engine – the most powerful engine in the line-up – that was mated to a six-speed auto gearbox. The engine offered an official 0-62mph time of 10 seconds, and delivered plenty of go on the motorway. The steering, meanwhile, was light, and could have done with being a little more responsive on twisty countryside roads. The Proace, however, is easy to manoeuvre at low speeds, and therefore agile enough to be guided into town centre parking spaces reasonably comfortably.

Inside you’ll find a cabin that’s practical due to both the hard-wearing, easy-to-clean black plastic and the amount of storage on offer, which includes a space underneath the middle seat big enough for a laptop. The driver’s seat is comfortable for long journeys, and the passenger and middle seats are fine for kids, but less so for adults – particularly my retired parents, who I had to collect from the airport – as the protruding moulding, where the automatic transmission sits as part of the dash, juts into the cabin and steals legroom from the middle passenger.

The most eye-catching item in the cabin is the head-up display, which whirs up from the dash when the van is powered up and looks like a Perspex slide. It displays speed and satnav directions and helps to keep the driver’s vision on the road ahead. Also eye-catching, however, was the sudden disappearance of the USB port that’s located next to the 12V supply and below the central locking button, and which vanished into a black hole behind the dash the first time I went to use it and applied the merest pressure. That meant a trip to the Steven Eagell Toyota dealership in Bucks, who were very friendly, fixed the issue (the port had probably not been clipped in properly on the production line) in around an hour, washed the van, and did it all for free.

I also noticed that the buttons on the touchscreen could be a bit ‘slippy’ – i.e. difficult to press – when changing preset radio stations in traffic, which meant a passenger completing the task for me, or if I was alone using the steering wheel or voiced-activated controls instead.

Our Toyota was equipped with the Smart Cargo system that enables narrow items that are too long for the load bay to be transported. It was used when I collected a second-hand wardrobe, that had been disassembled, on behalf of a friend. Most parts slid easily into the back, while the runners for the doors slotted through a panel located behind the passenger seat in the bulkhead. The passenger seat swivels up too so the load can fit in the cabin footwell. The system extends the overall load length from 2.5m to 3.7m, and volume from 5.3m3 to 5.8m3. The last time the load space was used, though, was when I had to take a dead dishwasher to the tip.

I’ve had friends take a casual interest in the van, paying particular interest to its looks. Part of that interest is due, I reckon, to the distinctive Ember Orange colour. Having lived with the Proace for six months, I like the look and feel, and my final thoughts match my first impressions: I’m impressed by the seeming effortlessness with which this LCV goes about its business.

Reputation = 4/5
Loses a mark only because we don’t currently consider it to be the leading LCV in its sector.

Cabin = 3/5
Solid performance. All the bases are covered and the comfort is good, but the USB port disappeared early on.

Service = 5/5
Okay, it was only a small job, but we received free, efficient service with a smile, nevertheless.

Load bay = 5/5
The load bay is without doubt a flexible space that’s simple to access.

Driving = 3/5
The Proace is a very easy-going vehicle out on the road.

Looks = 3/5
The Toyota  has been attracting some admiring glances.