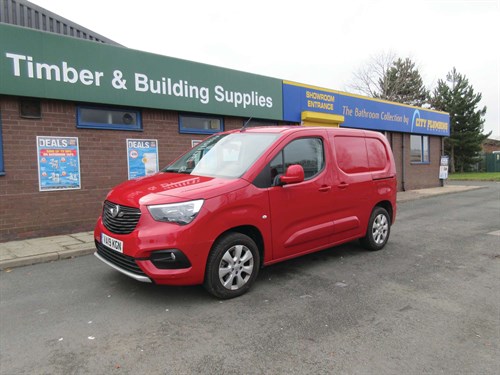 With 130hp on tap, performance was never an issue for the Combo Cargo, the handling seemed to get better and better as the weeks went on, and I was grateful for all the onboard safety kit, much of which was admittedly optional.

I was especially grateful for speed sign recognition. It shows you the speed you should be doing plus the speed you are doing in reality, with both shown on the vehicle’s optional head-up display. As well as enhancing highway safety it is a potential licence-saver.

The Combo Cargo gets top marks for its low-speed manoeuvrability, which was enhanced by the optional Parking Pack. Ultrasonic sensors sound the alarm if you are about to smack the van’s sides against a wall or another vehicle.

Another option worth mentioning is the Winter Pack, which includes heated seats and a heated steering wheel – just what you need first thing in the morning in chilly weather.

I liked the satellite navigation system too. A standard feature on LE Nav models, it provides clear and accurate visual and verbal instructions.

Fuel consumption remained at around 60.0mpg throughout my time with the vehicle, which was beneath the official combined figure, but not calamitously so. A readily accessible load area, a beefy full-height bulkhead, and FlexCargo, which allows extra-long items such as pipes to be transported in the back if you fold the cab’s outboard passenger seat down, made the van a perfectly competent load-carrier.

Drawbacks? Wind and road noise were a touch too high, and I cannot understand why manufacturers insist on stuffing three seats into a cab that only has room for two. A severe lack of leg and shoulder room means the extra seat isn’t fit for anybody other than your teddy bear. As far as I was concerned its only advantage was the ability to flip its back down and turn it into a desk.

The Combo Cargo is for the most part well-built, but regular rattling and creaking from the bulkhead almost drove me mad. The culprit turned out to be the FlexCargo hatch.

Bizarrely, you can shove over-length loads into what looks like a gigantic sock in a bid to stop them from rolling across the cab and ending up in the driver’s lap. It’s a rather awkward arrangement, and not one I favour particularly.

Overall, though, this light commercial is a useful workhorse with more plus points than drawbacks.

Remember also that it is sold by Citroen as the Berlingo, by Peugeot as the Partner and by Toyota as the Proace City. All four jointly scooped What Van?’s Light Van of the Year Award for 2020.

Safety =4/5
A mountain of safety kit.

Driving = 4/5
No lack of performance and spot-on handling, but in-cab noise is a bit too high.

Load bay =4/5
Practical and accessible, but the FlexCargo feature is awkward to use.

Cabin = 3/5
Why shoehorn in three seats? And some of the switchgear is too small.