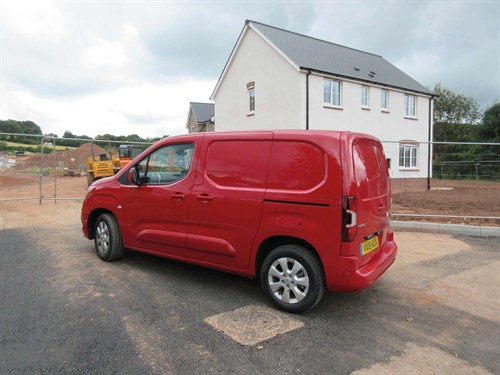 Vauxhall’s new Combo Cargo has joined the What Van? long-term test fleet and I celebrated the fact by giving our 2019 LCV of the Year an extremely long run barely 48 hours after it had arrived.

Ross-on-Wye in Herefordshire and central Glasgow are 362 miles apart, and with various side trips I clocked up just over 800 miles.

Happily, the newcomer came with the 130hp version of the 1.5-litre BlueHDi Euro6.2 diesel – the most powerful engine available in the Combo, with 300Nm of torque on tap. As a consequence, long-distance performance was not an issue given that it’s the short-wheelbase model and had barely 50kg in its 3.3m3 cargo area.

A six-speed manual gearbox is standard with this model. Ideal for motorway work, it’s  equally useful when it comes to dodging around busy city streets. An eight-speed automatic box is listed as an option and is likely to prove even more useful.

Given the length of the trek – much of it on the M6 – I was grateful for the presence of an optional Safety Pack with lane departure warning. It includes speed sign recognition too. In our case the speed limit on whichever highway the Combo happens to be on is shown on an optional head-up display that also gives you the speed you are actually doing. Its presence regularly prompted me to slow down, and it is without doubt a licence-saver.

The satellite navigation system that forms part of the top-of-the-range LE specification – Edition and Sportive are the other trim levels – gets top marks for its audible and visual
clarity. The map and the direction you are heading in is shown on an 8in colour touchscreen.

The Combo also gets top marks for its low-speed manoeuvrability, which was put to the test in an underground car park in Glasgow with unusually narrow ramps and tight turns. Happily, our test van is equipped with an optional Parking Pack with ultrasonic sensors that warns drivers if they are about to wallop the van’s sides.

Gripes? The lack of adjustment in the passenger seat prompted periodic complaints from its usual occupant, and wind and road noise is a little too high.

Turning to fuel economy, the official combined figure is 64.2mpg. I averaged closer to 60mpg on my England-to-Scotland hike.

The Combo shared What Van?’s much-prized LCV of the Year accolade with Peugeot’s Partner and Citroen’s Berlingo. All three share the same platform, are virtually identical bar some cosmetic differences, and Vauxhall, Peugeot and Citroen are all owned by PSA.

Like its stablemates, the Combo is marketed with two different wheelbases delivering two different overall lengths: L1 and L2. There is one roof height giving a load cube of either 3.3m3 or 3.8m3, while gross payload capacities run from 654kg to 987kg.

The Combo is also available as a crew van and with 75hp and 100hp versions of the 1.5-litre, both of which come with five-speed manual gearboxes. Toyota has started marketing its own version of the Combo/Partner/Berlingo under the Proace City banner.

Our test van is equipped with FlexCargo – yet another option – which means that the bulkhead features an opening panel behind the passenger seat. It allows a load-through facility to be created once you have folded the seat down so that extra items can be transported, and they can be pushed into what is in effect a large sack to stop them rolling around the cab. FlexCargo comes with a middle seating position, but I remain unconvinced that three abreast makes any sense whatsoever in a cab of this size. The centre seat is unviable for anything but the shortest of trips because it offers no legroom whatsoever. Its only plus point is that its back can be folded down and turned into a desk the driver can use to fill in paperwork, although fewer and fewer people resort to paper forms these days.