The flagship Hilux remains worthy of serious consideration but could be losing ground to newer competitors, James Dallas reports. 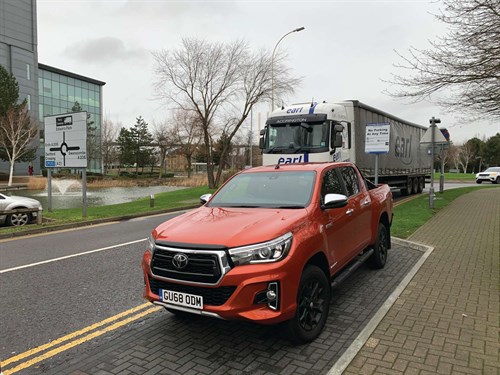 Competition in the double-cab pick-up sector has increased steadily over recent years, so, on the face of it, the withdrawal of a pair of upmarket players in the shape of the VW Amarok and Mercedes-Benz X-Class should be good news for flagship models such as the Hilux Invincible X.

With Toyota expanding its line-up of light commercial vehicles it should be able to absorb having a pick-up in its portfolio when legislation comes in this September obliging manufacturers to keep the average CO2 emissions of their ranges beneath 150g/km. What Van?’s Invincible X Automatic emits 189g/km.

But neither the Amarok nor X-Class are among the segment’s top sellers, and the Hilux has slipped behind the Mitsubishi L200 and Nissan Navara in the pecking order, while Ford’s Ranger is out of sight in terms of sales volume.

The Hilux is one of the lower-powered trucks on offer in the UK, its 2.4-litre lump producing a modest 150hp and 400Nm of torque, putting it on a par with the 2.3-litre Mitsubishi L200. The 1.9-litre Isuzu D-Max has an output of 164hp but lower torque of 360Nm and, like the Hilux, both these rivals come with six-speed manual or six-speed auto transmissions.

The new Ford Ranger, however, stands apart in top-of-the-range Wildtrak trim, with a slick 10-speed auto to complement the standard six-speed manual gearbox. It is also equipped with a 2.0-litre diesel unit that produces 213hp and 500Nm of torque.

The Hilux, like all of these trucks other than the L200, can legally tow loads of up to 3.5t.

The Hilux is comfortable to drive with bumps on- or off-road well suppressed and noise kept from encroaching too much into the cabin. On the other hand, it is slow, with a 0-62mph time of 12.8 seconds, which can make some manoeuvres, such as overtaking buses on busy urban streets or joining fast-moving traffic on motorways and dual-carriageways, tricky, although selecting Power Mode rather than Eco Mode does make acceleration a bit sharper.

The Hilux can also feel cumbersome and the understeer is pronounced, even for a pick-up truck, while the steering offers little feedback when cornering.

You would never expect nimble handling from a big pick-up but the Hilux has an even wider turning circle (12.8m) than any of its competitors, which can make negotiating tight city streets hard work. The Ranger circles in 12.7m, the Navara in 12.4m and the L200 in a comparatively adroit 11.8m. Sensors all around the truck, however, help to make you aware of hazards.

The tailgate on the Hilux is a tad clunky too – it’s as well to be aware that it is not restrained by gas struts and drops heavily when unlatched.

The six-speed auto gearbox is decent enough. It’s less lurchy than the D-Max equivalent but not so fast-shifting as the eight-speed on the VW Amarok or the 10-speed system on the Ford Ranger.

The Hilux remains a competent pick-up, its interior is sophisticated and well laid out, and both the driver’s seat and steering wheel allow ample adjustment to find the best driving position. Off-road the truck is a match for any, but on-road it’s hard to avoid the sense that it could do with an update to avoid falling further behind key rivals.

Safety =4/5
A wealth of equipment is included and adaptive cruise control is now part of the package on new models.

Aftersales = 4/5
An efficient and hassle-free service.

Performance = 3/5
Decent enough but no longer one of the class leaders.