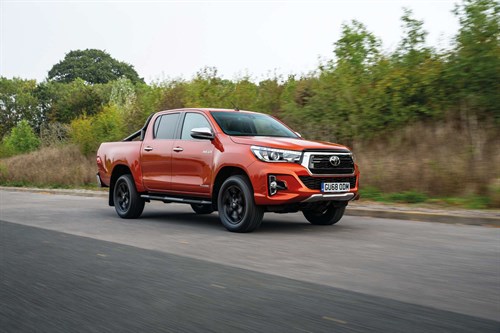 The Toyota Hilux, which What Van? inducted into its Hall of Fame at its 2020 awards ceremony, has gained legendary status over the past half century for its go-anywhere capability and near-indestructible toughness.

Few would quibble with the view that it is the only pick-up truck in the UK to have truly achieved iconic standing. Much like the Ford Transit in the world of panel vans, nobody is likely to raise a sceptical eyebrow at the utility company fleet manager who invests in a batch of Hilux 4x4s.

But the Hilux is facing far stiffer competition these days in the UK’s burgeoning, tax-break-driven pick-up sector, so where is it now in the pecking order? Over the coming weeks we aim to get a clearer idea.

Toyota introduced the top-of-the-range Invincible X double-cab, driven here, to the Hilux line-up in the third quarter of 2018. The Invincible X stands out from the rest of the Hilux pack because of the different front-end treatment it has received.

It consists of a new grille with glossy black inserts and a contrasting chrome frame plus a new-look front bumper, fog lights and silver under-run. A silver under-run appears at the rear too, with a new step to make it easier to access the cargo area. Steps are incorporated into the sill bars as well.

The cab gets its own internal styling, which follows an all-black theme with leather-trimmed seats and a contrasting chrome instrument panel trim.

The Hilux specification walk starts with Active (which is offered in single- and extended-cab format), then progresses through Icon and Invincible before it reaches Invincible X.

The manufacturer made further tweaks to the Hilux in 2019, which were mainly concentrated on safety features.

Disappointingly, our Invincible X does not get adaptive cruise control, but Toyota has now made it standard on the latest higher-trim models.

Power comes from a 2.4-litre diesel engine that produces 150hp and maximum torque of 400Nm across a 1,600rpm to 2,000rpm plateau. This is married to six-speed automatic transmission on our truck, but Toyota has reintroduced the option of a six-speed manual gearbox to the Invincible X for those who prefer it.

By way of comparison, the new version of the Hilux’s great rival, the Ford Ranger, is equipped with a 2.0-litre diesel unit that produces 213hp and 500Nm of torque in top Wildtrak specification. The Ranger also gets a new 10-speed speed auto to complement the standard six-speed manual gearbox. Another competitor, the Mitsubishi L200, has a new 150hp 2.3-litre engine producing 400Nm of torque. Like the Hilux, it is offered with six-speed manual or auto transmissions.

A fourth name in the frame is Nissan’s Navara, which gets a 2.3-litre engine with outputs of 163hp (425Nm torque) or 190hp (450Nm torque) and six-speed manual or seven-speed automatic transmissions.

So the Hilux lacks a little in power next to some competitors, but this needn’t make you feel shortchanged as it bowls along gamely enough on the road, delivering power smoothly and handling well through corners.

Report Card: Safety = 4/5
A wealth of equipment is included and, although not on our vehicle, adaptive cruise control is now part of the package on new models