Covid-19 and the restrictions it has imposed on long-distance travel mean that so far I have not been able to clock up as many miles in the Berlingo as I would like to have done.

Spending more time stationary has enabled me to examine some of its features more closely, however.

These include the ability to extend the load bed if you want to transport items that are too long to fit into the cargo area, such as planks or poles.

To do so you tug a blue strap at the top of the seat closest to the passenger door and flip the seatback forwards. Once you have dropped the back down, you will see it boasts a steel plate that should ensure whatever ends up resting on it will not do the seat any harm.

You also need to open a hatch in the full-height steel bulkhead directly behind the seat. This is done by flipping up a catch and then folding the hatch backwards into the cargo bay. The exercise extends the Berlingo’s cargo floor by up to 1,219mm. A notice on the bulkhead says that if you use this facility then the middle passenger seat should be left unoccupied on safety grounds – not that most people would want to use it anyway, given the absence of legroom.

Presumably, the fear is that whatever is loaded through could end up in the centre passenger’s lap. To make doubly sure that there are no hazards, what I can only describe as a large fabric sock is provided, which can be secured to the bulkhead. Any planks, pipes or other cargo can be pushed into it to ensure they do not end up prodding anyone. 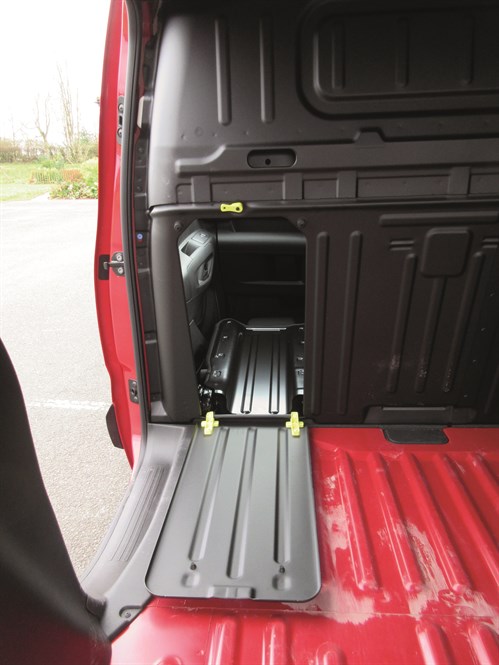 Get real Citroen. Despite good intentions, I cannot for one moment imagine that anyone would end up bothering with it. It is too fiddly and is likely to end up being chucked into the load area or folded up and dumped in the passenger footwell. That’s where ours has ended up, in fact.

These criticisms aside, the load-through facility makes sound sense. This makes it less likely that Berlingo owners will need to have a roof rack fitted, which would wreck the van’s aerodynamics and run the risk that whatever is carried on the rack might be stolen.

Weaving my way along the rural roads of Herefordshire – an exercise that involves dodging a succession of massive potholes thanks to the thoroughly disgraceful state of the county’s highways – I have become increasingly impressed by the Berlingo’s manoeuvrability.

Swinging the Berlingo in and out of gateways to avoid oncoming tractors is a doddle, as is wriggling it into tight parking spaces in the centre of villages. The reversing sensors are of particular help in this case.

And a word of praise for the Berlingo’s wash/wipe system: spring means daffodils, lambs, Easter eggs and a steady stream of incontinent birds using the Citroen’s windscreen for target practice. The wipers and screen washers clear the evidence away very effectively rather than smearing it across the glass, giving the driver clear vision in a matter of seconds. Although it should perhaps be added that there is a section on the passenger side that the wipers manage to miss.

Of course, the birds manage to hit it bang on every time, unfortunately. Just as well pigs can’t fly.