During a stint of more than six months on the What Van? fleet the Custom Sport has proved its class. 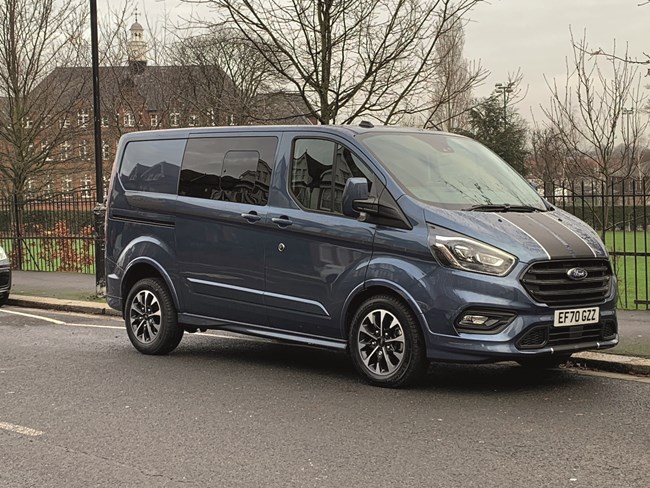 Following a welcome extension to its spell on the What Van? fleet, it is almost time to bid farewell to my Transit Custom Sport DCiV (double-cab-in-van).

The Transit Custom is not only the UK’s biggest-selling van by a considerable margin – a position it has held since its launch in 2012 – but it has also been hailed as one of the most accomplished, a claim we have little reason to dispute having lived with the van for more than half a year.

The Custom Sport’s appearance is immediately impressive: it is slick, stylish, well proportioned and likely to appeal to owner drivers and small businesses that want to add a bit of panache to their operations with some kerbside kudos, rather than to fleets that want to work their vans hard in conditions where they might pick up occasional scuffs and scratches.

The DCiV Sport version will also suit operators that want a dual-purpose vehicle they can put the family in at weekends after ferrying work colleagues from Monday to Friday.

Car-like is a much overused description when it comes to bigging up light commercial vehicles’ luxuriousness and performance, but it can legitimately be applied to the Custom Sport’s driveability and comfort.

My van’s looks are enhanced by 17in alloy wheels, metallic paint (£624 excluding VAT), a Sport Van body styling kit, hood accent stripe and a coloured grille with three base bars. Inside there are two front seats and a three-seat rear bench that is separated from the load bay by a full bulkhead, which helped the cabin to warm up quickly on cold winter days. The driver and front seat passenger also benefit from heated seats, while the Quickclear heated windscreen – something Ford has long provided – means you don’t have to wait for ages for the glass to clear.

The chunky, leather-trimmed, rake and reach-adjustable steering wheel is leather trimmed, as are the seats. The centrepiece of the cab is the floating, tablet-inspired, 8in colour touchscreen with Ford’s Sync 3 communications and entertainment system, which can be operated with pinch and swipe gestures. It houses two USB outlets and, it goes without saying, DAB radio. Sync 3 is compatible with Android Auto and Apple CarPlay and also offers Emergency Assist via Ford Pass Connect.

There is no satnav but Apple CarPlay allows you to use a smartphone instead. Once it’s plugged in, the route map and directions appear on the screen. You can also access other services, including the option to hear and reply to messages without touching your phone.

My Custom Sport has a decent payload of 904kg combined with a compact load cube of 3.5m3. This falls short of the hefty 1,143kg payload and 4.3m3 cargo bay of a previous long-term test van, the Volkswagen Transporter Kombi. But unlike the Kombi, the Ford van comes with a full-height solid bulkhead, which means you can fill the load bed to its limit without worrying that objects breaking free under heavy braking will fly into the cabin and endanger its occupants. Nothing should come loose anyway if operators make use of the six steel tie-down loops to secure cargo in place. 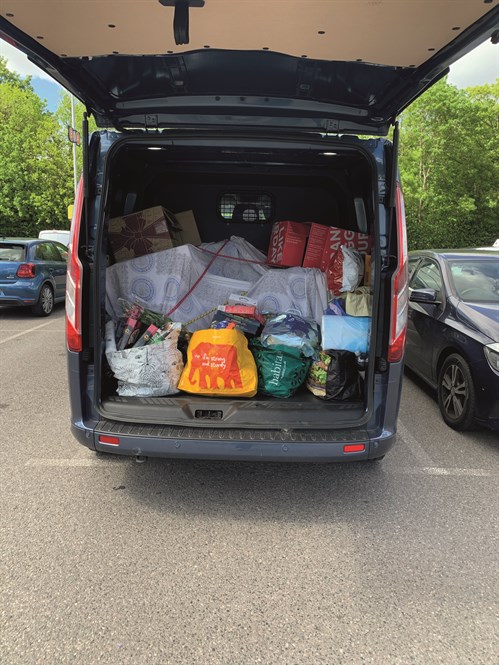 The load area’s interior is well protected from minor damage by a rubber floor lining, wheel arch covers and wood panelling extending halfway up the walls and covering the inside of the tailgate, which is branded as a ‘liftgate’ by Ford and installed on my Custom Sport as a £240 (excluding VAT) option.

By way of further load-carrying comparison, the Vauxhall Vivaro L1H1 Edition double-cab, which is also available from fellow PSA Group brands badged as a Citroen Dispatch or Peugeot Expert, offers a payload of 1,308kg with a load volume of 3.2m3.

Rear seat passengers in the Custom Sport DCiV can gain access to their berths via sliding doors on both sides of the van, which is by no means a given on crew vans, many of which only provide a near-side door.

The bulkhead and opaque liftgate mean the driver has to rely on the van’s wing mirrors when on the move, but these are plate-sized and include a wide-view section to improve vision.

The Custom’s precise steering is as good as it gets in the mid-sized van sector and the six-speed auto box takes the strain out of footwork when on urban missions. With Ford now marketing rear-wheel drive Transits and flagship Ranger pick-up trucks with a 10-speed auto, however, it will be interesting to see if the system finds its way into the Transit Custom in future considering the strength of the competition. Volkswagen’s seven-speed DSG is still going strong in the Transporter while the Citroen Dispatch, Peugeot Expert, Vauxhall Vivaro and Toyota Proace all employ an excellent eight-speed automatic transmission.

The Sport is well protected by driver assistance features: an excellent rear-view camera and parking sensor prove invaluable when reversing into tight spots, front sensors come in handy when negotiating London’s vicious traffic calming installations, blind spot Information lets you know when cyclists are lurking either side of the van, and cross-traffic alert can be crucial in preventing accidents when backing out of car park spaces or driveways on to busy streets.

Fuel consumption improves once you escape the city’s limits. On long motorway hauls the adaptive cruise control installed in the Sport is a boon to improving economy and facilitates a relaxing drive. The system, which includes an adjustable speed limiter, is easy to use by way of steering wheel-mounted buttons. It features settings to determine how close the van gets to the vehicle in front before the brakes are automatically applied to maintain a safe distance. Using the speed limiter is a simple way to ensure you don’t stray above legal limits, particularly on the vast stretches of the UK’s motorways that are restricted to 50mph.

Press the eco mode button on the dashboard and economy is improved still further, but there is a noticeable dip in performance. Acceleration is muted and, with or without cruise control engaged, top speed is restricted to 70mpg. Selecting eco mode with a full payload in the back is not recommended.

Out of eco mode performance is impressive: the Sport can easily hold its own in the fast lane and acceleration is swift enough to make overtaking a straightforward procedure. The six-speed automatic gearbox delivers power sharply from the 185hp engine and handling is exemplary with well-weighted, precise steering helping the van to move smoothly around corners.

While the Sport is the flagship model, the Transit Custom range is accomplished overall and there is little to suggest it will be knocked off its perch as the nation’s favourite van anytime soon.

The Transit Custom Sport is a stylish, slick-looking van that will enhance the image of customers’ businesses.

A sturdy bulkhead protects the cabin, but payload and load volume are competitive rather than class leading.

The Transit Custom Sport is well-equipped to keep you out of mischief.

Sharp steering and transmission are well matched to ample power.

The Transit Custom Sport is a well put together medium van.