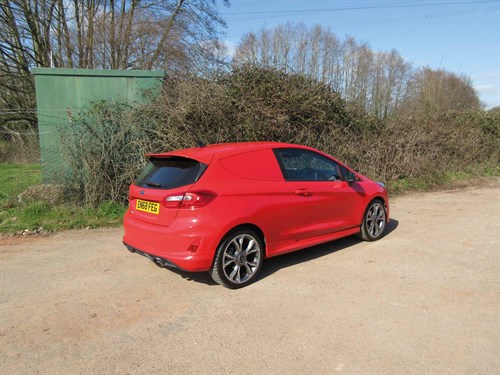 The Sportvan is covered by a three-year/60,000-mile warranty with roadside assistance provided for the first year on an unlimited-mileage basis. Nor is there a mileage limit on the year-long paint warranty.

The package is not overly generous, but redeems itself somewhat with a 12-year/unlimited-mileage anti-perforation corrosion warranty. Service intervals are set at one-year/10,000 miles, which is on the short side for a modern diesel LCV.

At 54.7mpg, according to the onboard computer, we averaged significantly less, travelling lightly laden along a mix of motorways, A- and B-roads and including a crawl around Bristol city centre. We did it all on a still, dry, warm day.

A gearshift indicator light encourages you to change to the most economical gear and stop/start (which can be switched off) helps fuel efficiency too, especially in urban areas.

Smart regenerative charging ensures that the battery is only recharged when it needs it, saving energy again.

There is another way in which the Fiesta Van can help cut diesel usage: Press the ‘EcoSelect’ button and you reduce peak power and torque, thereby reducing diesel consumption further.

We found that using it diminishes on-the-road performance by an estimated 5% to 10%, which should be liveable with in most cases.

In addition, the Active Grille Shutter keeps a shutter open to cool the engine at low speeds, but closes it at higher speeds.

That makes the vehicle more aerodynamic, thus saving fuel. A steel spare wheel is provided and the Ford Fiesta Van is also equipped with an EasyFuel cap-less refuelling system.

Verdict: Compact and fuel-efficient with a high degree of manoeuvrability, the Fiorino Cargo is tailor-made for Britain’s urban streets. It’s no slouch in the countryside either, with the Adventure guaranteed to keep you rolling in moderately slippery conditions thanks to mods such as a raised suspension and the Traction+ electronic diff lock.

Verdict: The fact we are putting up another Ford product as a rival to the Fiesta Van serves only to underline the lack of choice in this sector of the market. Not that this should be taken as a criticism of the Transit Courier. What Van?’s Small Van of the Year for 2019 offers impressive handling, a decent ride, a precise gear change and respectable fuel economy.

Verdict: While the Mercedes-Benz Citan is a close cousin of Renault’s Kangoo, the Kangoo line-up no longer contains a model as small as the Compact. The load cube is respectable for a light commercial of its size, but the payload capacity is modest, and Renault dropped the Kangoo equivalent because it found there was insufficient demand.