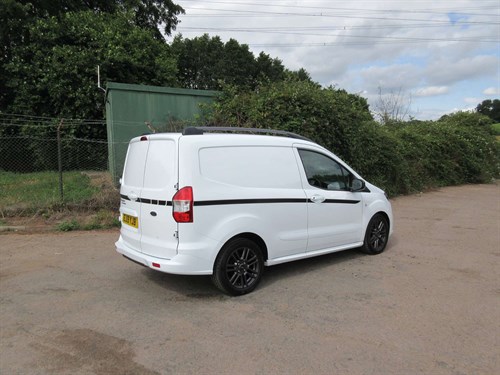 The Transit Courier is protected by a three-year/100,000-mile warranty with service intervals set at one year/10,000 miles for our diesel.

Some operators may view that as too short a gap between workshop visits.

That is not the case, however, if a van is constantly submitted to the rigours of urban traffic, and bounced up over kerbs every day of the week.

Fuel economy? We averaged around 60mpg on a mixture of routes, lightly laden – slightly short of the official combined figure of 62.8mpg, but not so far adrift as to cause us concern.

Auto stop-start was not installed, but is available as an option. Regenerative braking is fitted to all models, however.

Ford’s Easy Fuel system means you don’t have to worry about losing the fuel filler cap and is designed to ensure you don’t fill up with the wrong fuel.

Rubbing strips are fitted to help protect the vehicle’s black-striped sides and are finished in the same colour as the body.

So are the door handles and front and rear bumpers, and both bumpers are accompanied by a skid plate.

It’s good to see a full-size spare wheel rather than an (at times frankly useless) inflator and sealer.

Verdict: A compact, frugal and highly manoeuvrable load-shifter, the Fiorino Cargo is tailor-made for Britain’s urban jungle. It is equally at home on rural roads, with the Adventure model capable of keeping you moving in slippery conditions thanks to features such as an electronic diff lock and raised suspension.

Verdict: Citing another Ford model as a rival to Transit Courier even though it’s smaller underlines the breadth of the brand’s range, and the lack of compacts from other makers. With a small load area and  modest payload, the Fiesta Van isn’t hugely practical, but spend five minutes in the Sport Van model and you’ll forgive it any shortcomings.

Verdict: While the Citan is closely related to Renault’s Kangoo, the Kangoo range has not included a model as small as the Compact for several years. Renault dropped the Kangoo equivalent because it found there was insufficient demand. Payload capacity is woeful, although the load cube is respectable for a van of this size.