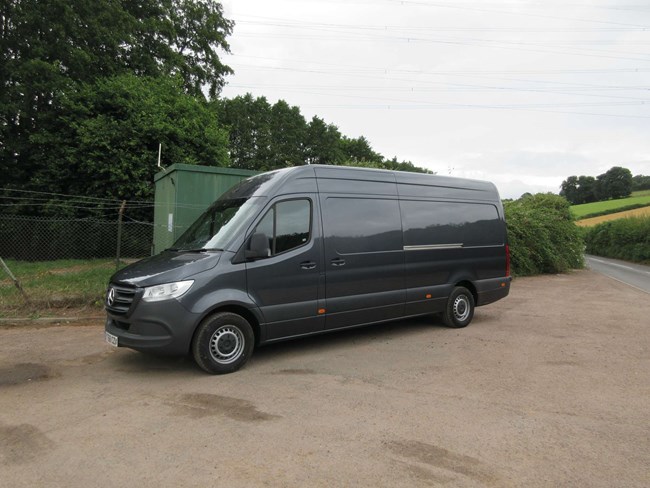 Constantly stopping and starting, bounced up over kerbs, and with their cargo area doors wrenched open and slammed shut umpteen times a day, they have to be remarkably robust to withstand the battering they receive.

That is why so many home delivery fleets opt for Mercedes-Benz’s Sprinter. Experience has shown them that it will withstand all the punishment it will receive without falling to bits.

The Sprinter underwent a major redesign not long ago, and one of the key developments is the addition of front-wheel drive (FWD) to the line-up. Previous models were rear- or four-wheel drive only, and both layouts remain available.

FWD gives you a loading height that is 80mm below that of rear-wheel drive (RWD) variants – good news if you are stepping in and out of the cargo area all day. Payload capacity is 50kg higher – a modest increment, but still worth having – and you get 0.5m3 more load space.

No changes have been made to the engines other than the introduction of a keyless push-button starting system. No disrespect to Mercedes, but we remain dubious about such starting arrangements on security grounds.

The Sprinter is still listed with 2.1-litre diesels at 114hp, 143hp and 163hp as well as with the always impressive 190hp V6 3.0-litre diesel that, alas, is not offered in FWD derivatives.

Changes have been made to the transmission, however, with the arrival of an optional (and highly desirable) nine-speed 9G-Tronic automatic gearbox. You can choose it if you opt for FWD – go RWD and you are restricted to a seven-speed 7G-Tronic auto as an option. A new six-speed manual gearbox is standard across the range. In the pipeline is an electric Sprinter, which should appear on this side of the Channel during Q1 of next year.

Vans are marketed with three load compartment heights and four body lengths and the Sprinter is additionally sold as a crew van, a chassis cab and as a chassis double-cab.

Mercedes has also come up with tipper, dropside and Luton conversions.

We went for a manual 316DCI powered by the 163hp diesel married to the six-speed gearbox with the third-longest length (L3) and the second-highest roof (H2) listed. It had a lot of options fitted, and it wasn’t cheap.