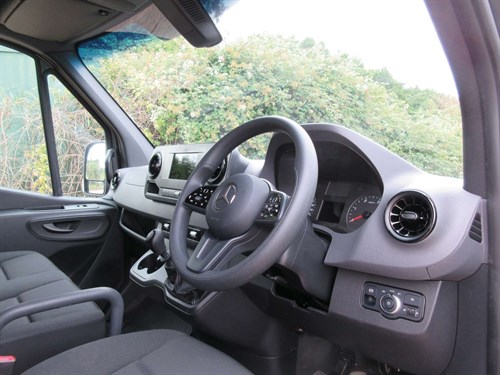 Climb into a 3.5-tonner’s cab – a three-seater in this case – and you automatically reach for a grab handle to pull yourself aboard. Ideally, it should be on the A-pillar, but Mercedes has decided to position it on the door instead with a second one above the door aperture.

The door-mounted grab handles are extra-cost options, as is the handle mounted between the driver and passenger seat for the inboard passenger to cling to. While its provision may be laudable, its positioning makes things rather awkward for any driver who wants to slide across the cab and step out safely onto the pavement. A ceiling-mounted handle might make more sense.

It seems a little odd to see items such as these (not to mention the bulkhead-mounted coat hook) listed as options rather than included in the price.

Once you settle down behind the wheel you are faced with a rather dull-looking dashboard whose main feature is a seven-inch touchscreen, which governs the Mercedes-Benz User Experience (MBUX) multimedia system. Both the seat and steering wheel are height-adjustable and the latter plays host to the remote controls for the standard DAB radio.

Opening the driver’s door switches the radio off so you don’t disturb slumbering householders when making deliveries late at night.

Bluetooth connectivity is available and the touchscreen can play host to Apple CarPlay and Android Auto.

The three-seater cab offers more generous shoulder room for everybody than one might expect. Although the occupant of the middle seat suffers restricted legroom, it should not pose too much of a problem on short trips.

You get plenty of storage space for your money although we would rather see a lidded and lockable glove box instead of an open shelf. There are two bins in each of the cab doors, shelves on top of the dashboard, and shelves above the windscreen on both the driver and passenger side.

Mercedes clearly expects the occupants of the cab to spend a lot of time drinking tea or coffee. No less than four cupholders are mounted on top of the dashboard (one of which plays host to a removable ashtray that will hopefully be used solely as a mini waste bin instead) and there are two more on the front of the fascia next to the gear lever.

Satnav was installed as was semi-auto aircon. They are both options at extra cost, as are the reversing camera – its images are displayed on the aforementioned touchscreen and it is not complemented by reversing sensors – and the electrically adjustable and heated exterior mirrors.

Electric windows are included in the overall deal, as are cruise control, a USB socket and a driver’s airbag.

Satnav gets you the Hey Mercedes voice command system. Ask it where the closest service stations are, for example, and it will give you a list, tell you which brands of fuel they sell and provide directions to whichever one you select. That can be invaluable if you are in an unfamiliar area of the country.

Also provided is What3words – a geocoded mapping system that will direct you to within 3m of any location in the world. The Sprinter’s cab can also become a wi-fi hotspot with a permanent internet connection subject to a data contract with Vodafone.

Active brake assist can apply the brakes automatically if it senses a hazard – a pedestrian stepping out in front, for instance – and the driver fails to take action. Crosswind assist reacts to sudden gusts of wind on, for example, exposed sections of motorway, and responds with targeted braking to stabilise your van. Attention assist, meanwhile, displays a coffee cup symbol on the instrument panel when it reckons you are getting drowsy and need a break.

If it all goes wrong and your Sprinter breaks down then help can be summoned at the touch of a button. Breakdown Management establishes a data and voice connection to the vehicle and enables – hopefully prompt – MobiloVan and Service24h assistance.

It is one of a whole range of services that are available with a connected Sprinter. Some of them are free, some are free for the first three years, and some -–available from the Mercedes Pro eStore – may attract a charge.

Pro packages include Efficient Driving Style Analysis. It records data on an individual’s behaviour at the wheel, which can then be used to achieve improvements, thereby reducing fuel consumption and increasing safety.

This praiseworthy stress on connectivity as part of the manufacturer’s adVANce programme is one of the most important changes to the Sprinter, and potentially far more significant than any of the hard metal alterations.