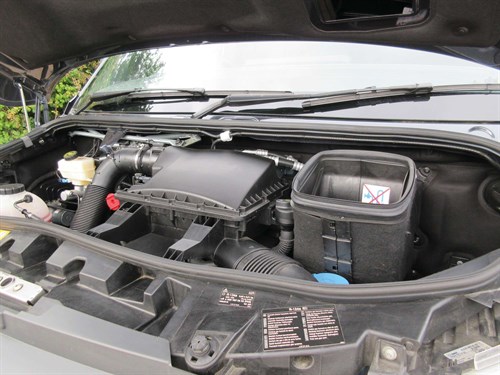 Speed-sensitive electric power steering is standard and delivers a 15.2m turning circle between kerbs rising to 16.1m between walls.

Independent suspension is installed at the front while parabolic springs help to support the rear. Our Sprinter’s 16in steel wheels were shod with Continental VanContact 200 235/65/R16C tyres.

The optional electric handbrake release – you flick a switch on the dash – works fine once you get used to it.

Lightly laden, and with 163hp on tap, our Sprinter accelerated strongly away from rest and continues to deliver power seamlessly all the way up the rev band. We were impressed by the engine’s flexibility, which meant we rarely had to change gear – just as well because the gear-change lacks crispness.

While wind and road noise could stand to be better controlled, any noise from the engine is muted, and rarely makes its presence felt in the cab. Smooth and dependable, the handling allows you to sweep majestically through bends without having to worry that something will go wrong.

Accompanied by a good deal of bouncing around, the Sprinter’s ride isn’t its strong suit if you only have a few kilos in the back.

However, the vehicle seems to be frugal. We were getting around 36mpg – not far short of the official combined figure. Stop/start was fitted, which helped keep fuel usage down.

Active brake assist cut in twice during our test: once when a car swung in front of us, but once when it appeared to confuse street furniture positioned close to the kerb with a vehicle.

It is a phenomenon we have noticed before with this type of system and although it is annoying, it’s one that a driver can probably learn to live with – just so long as it doesn’t happen every five minutes.