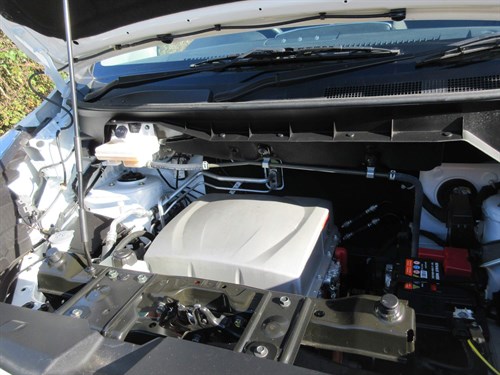 It takes power from a 40kWh 360V 192-cell laminated lithium-ion battery that sits under the load floor in a reinforced area, which should hopefully protect it in a collision. Maximum torque is 254Nm.

Press the brake pedal, ensure the shift lever is in ‘P’ for park, then press the starter button – the instrument panel lights up, which means you can get going. All you need to do then is push the lever into ‘D’ for drive, release the handbrake and you’re away. An electric motor delivers all the torque it has available immediately, so acceleration from rest is strong and continues to be so as you pick up speed.

A light right foot is called for in order not to deplete the battery too soon.

Despite the promises of a longer range, it is difficult not to keep checking the dash display to see how many more miles you can travel before recharging. The range starts to drop quickly if you have the heated seats, heated steering wheel and cab heater all switched on in chilly winter weather.

To maximise range press the Eco button, although doing so affects the van’s performance noticeably, and more so than on the previous model. Something else you can do is push the shift lever into the ‘B’ for braking position. That increases the level of regenerative braking and means energy that would otherwise be lost is funnelled into the battery pack. ‘B’ also helps to slow the vehicle on steep descents. It is as though the van has been fitted with a retarder, and means you make less use of the foot brake.

The Nissan’s handling could stand to be a bit sharper and the ride could be better damped. On the positive side, however, the eNV200 is easy to manoeuvre at low speeds and is undoubtedly quiet. While that is good news for the occupants, remember that cyclists and people crossing the road use their ears as much as their eyes, so may not be aware of your presence until you are almost on top of them.

So make sure the Vehicle Sound for Pedestrians (VSP) system is switched on. Operating at around-town speeds of below 19mph, it lets people know you are in their vicinity – assuming that they are not wearing headphones, of course…

With the dashboard display telling us we could travel 150 miles, we drove from Ross-on-Wye in Herefordshire to Newport in South Wales – an 80-mile non-stop daytime round trip in dry, still, weather.

We travelled on A-roads for the most part, made extensive use of the Eco button, kept the seat and steering wheel heaters switched off, and used the lightest of light touches on the accelerator, tickling the Nissan along wherever possible. We had a token 100kg load in the back, and did not use cruise control, which is a standard feature and includes a speed limiter.

So did we get back without any mishaps? We did – with an indicated 40 miles to spare. But had we switched on everything possible, forgotten about the Eco button, pressed the pedal to the metal and been heavily laden, we might only have reached Monmouth on the return leg of the trip. 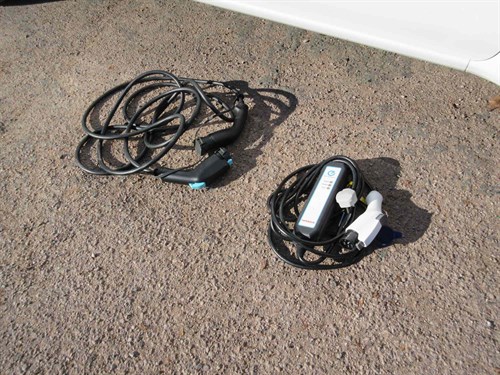