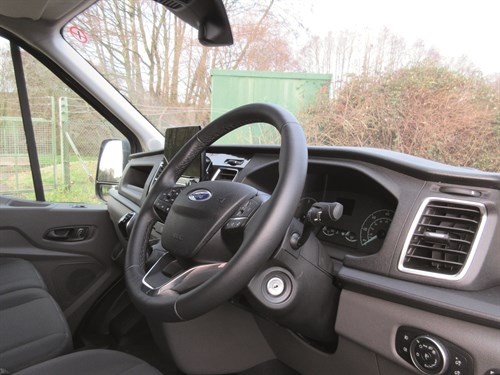 Our Transit’s three-seater cab was not short of storage space, with shelving above the windscreen cleverly incorporating grab handles adjacent to the A pillars, four shelves on top of the dashboard, and a large, lidded and lockable glovebox with a shelf above it.

There were bottle and cupholders at each extremity of the fascia, plus a pull-down cupholder housed in the moulding that accommodated the gear lever.

Big bins in each of the doors were shaped to grasp a bottle or a flask, and the centre section of the middle seat’s back could be folded down to create a handy desk. It featured an elasticated strap to keep paperwork in place, a recess for your pens and two more cupholders.

Anybody who occupied the middle seat suffered from legroom that was slightly restricted.

When we pulled up the cushions of the passenger seats we found a large hidden compartment big enough to conceal power tools and other items that thieves would find attractive.

Complete with an inboard armrest and lumbar adjustment, the Transit’s driver’s seat was height-adjustable, as was the leather-trimmed steering wheel, home to the DAB radio’s remote controls. The gear knob was leather-trimmed too.

In-cab equipment included a driver’s airbag, air-conditioning, and an 8in TFT touchscreen in the middle of the fascia.

Ford Sync3 was installed, which integrates with compatible smartphones and allows drivers to use the touchscreen or voice commands to control everything from phone calls and text messaging to music and satellite navigation. AppLink enables Sync-compatible apps to be controlled. Emergency assistance helps the driver contact the emergency services if there is an accident and pinpoint the vehicle’s exact location.

Electric windows and heated and electrically adjustable and folding exterior mirrors were fitted, with each of the latter featuring a lower wide-angle section.

Two 12V power points plus a USB socket were provided, along with Bluetooth connectivity.

Reversing sensors were installed, and could be switched off. Sensors were provided at the front too to make it easier to park in tight spaces, and our demonstrator came with side park assist to make things even simpler. Ultrasonic sensors warn if the van’s flanks are too close to an obstacle.

Front fog lights were included in the deal, along with bright bi-xenon headlights with LED daytime running lights, plus a Quickclear heated windscreen and rain-sensing windscreen wipers.

Disc brakes were fitted all round.