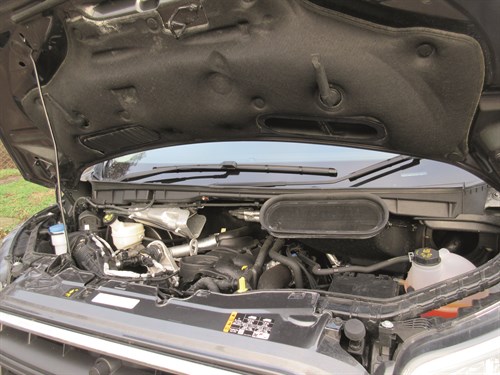 Selective catalytic reduction uses AdBlue. The 21-litre reservoir top-up point is under a flap adjacent to the passenger door along with the cap-less Easy-Fuel diesel filler point.

Last autumn saw this engine suffer injector problems that Ford has been busy resolving. It says that they will not affect new orders.

The Transit’s independent front suspension featured independent MacPherson struts with variable-rate coil springs plus a stabiliser bar, while leaf springs helped to support the rear. Gas-pressurised shock absorbers were fitted all round.

Strong acceleration away from rest to the accompaniment of Ford’s excellent-as-usual gear change made for a good start.

With plenty of power on tap, the 185hp Transit proved more than capable of handling high-speed motorway runs, but was equally at home tackling steep rural hills fully laden. That was when all the torque that is on tap really came into its own.

Heading down the steep, twisting, A46 from the M4 motorway towards Bath city centre in driving rain, we were grateful for the Ford Transit’s precise, predictable handing. As we swung the wheel from left to right and splashed through the surface water we silently applauded the grip delivered by the light commercial's Michelin tyres as they clung to the increasingly sodden highway.

The presence of curve control may have helped. It is designed to ensure you remain in charge of your van if you go into a bend too quickly. If it detects understeer and senses you may be about to lose control, it reduces engine torque then applies the brakes to help slow you down.

While our test Transit rode well, there was a touch too much bumping and thumping from the suspension even on smooth highways. Engine noise could be intrusive too, although neither of these criticisms amounted to major issues.

Auto stop-start was fitted, which helped to keep fuel usage down, as did using the Eco setting on the mode switch. Resorting to it alters the vehicle’s torque setting and rate of acceleration among other functions. Such systems typically cut a vehicle’s fuel consumption by around 10%.