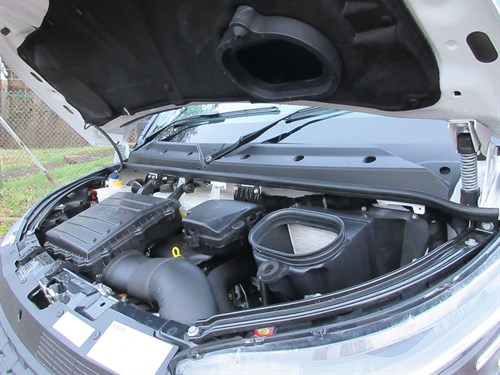 SCR’s presence means that the 20-litre AdBlue reservoir mounted under the cab floor has to be topped up every so often. The filler point is under a flap next to the driver’s door.

Stop/start is included in the deal in order to keep down fuel consumption and CO2 emissions. All you need to do to restart the engine is dip the accelerator pedal.

The Hi-Matic transmission was superb, slipping smoothly from one gear to the next and helping to deliver all the power we needed exactly when we needed it.

We switched to manual mode briefly.  It was easy to use, but we saw little point in resorting to it, especially after flicking the box into neutral inadvertently on a couple of occasions. Blame the ham-fisted driver rather than the box itself.

Performance was not an issue, with strong acceleration from rest. For a bit more punch when overtaking or climbing a steep hill hit the ‘PWR’ button, and press ‘Eco’ to maximise fuel economy in exchange for a slight fall-off in on-highway performance.

In-cab noise levels were well under control and we applauded the sharp handling. It allowed us to fly through bends without breaking sweat.

Low-speed manoeuvring was a doddle thanks to the considerable amount of extra steering assistance we enjoyed whenever we pressed the ‘City Mode’ button. It reduces the effort required to turn the wheel by up to 70%, says Iveco.

Our van was equipped with the optional electric parking brake, which automatically engages when the vehicle is parked, and disengages when the driver is ready to move away. We noted that there was more than enough space between the driver’s seat and inboard passenger seat for a conventional floor-mounted handbrake lever.

Drawbacks? A key one was the poor ride when empty or lightly laden. The van struggled on even the smoothest of highways, and things only calmed down once we put some weight in the back.

Engage reverse and you will quickly realise that the reversing camera gives you a distorted view, making the slot you are backing into look narrower than it actually is. Perhaps that’s no bad thing...

Iveco’s Quad Leaf independent suspension, which uses trapezoidal-shaped double wishbones, helps support the front of the vehicle, reinforced parabolic springs are deployed at the rear, and shock absorbers are to be found all round.

Our demonstrator’s optional 16in alloys were shod with Michelin Agilis 235/65 R16C tyres; Iveco says the low rolling-resistance version used has been specially designed for the Daily.

A TPMS – tyre pressure monitoring system – is available to keep an eye on them.

A tyre inflator came with our test van rather than a proper spare wheel. We would far rather have the latter, and live with the slight loss of payload capacity.