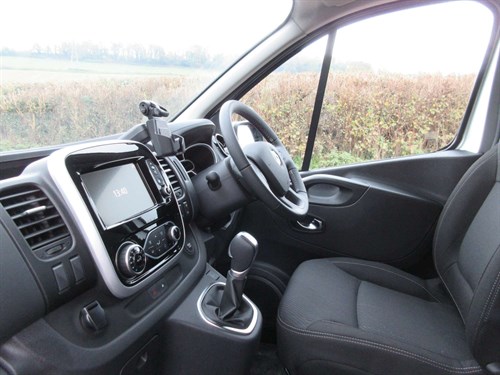 Opt for Sport specification and you will not be short of goodies. They include a MediaNav Evolution 7.0in touchscreen system as standard with satellite navigation, a DAB radio, Bluetooth connectivity, aux and USB ports plus Apple CarPlay and Android Auto.

Our Trafic also boasted manual air-conditioning, an optional reversing camera – the image is shown on the screen in the middle of the dashboard, with reversing sensors housed in the back bumper – and heated and electrically adjustable exterior rear-view mirrors, which come with a separate, lower, wide-angle section.

Both the mirror casings and the front bumper are finished in the same colour as the body.
Other features include a smartphone cradle, cruise control with a speed-limiter, a trip computer, a 12V power point, electric windows, and remote controls for the DAB radio on the steering column.

Front fog lamps are included in the deal too, as are automatic headlights and wipers and a driver’s airbag. The passenger airbag is an optional extra.

Storage facilities include a roomy glovebox that, alas, is not lockable, plus a compartment on top of the dashboard with an ill-fitting lid. The lids on other Trafics we have driven fit poorly too, suggesting that Renault needs to pay more attention to build quality.

An open compartment on top of the dashboard can accommodate an A4 clipboard. There are two bins in each of the three-seater cab’s doors, and if you pull up the passenger seat cushions you will find plenty of space for any valuable tools you want to conceal underneath.

That assumes, of course, that you are not making use of the van’s load-through facility.

If you are attempting to transport something that is a bit too long for the cargo bed, you can open a flap at the bottom of the bulkhead and push the end of the item into the 54-litre void beneath the seats. If you need more length you can open a flap in the seat base and push the item right into the passenger footwell. Both flaps are held open by magnets and give you an overall length of 4,150mm.

The centre passenger seat’s cushion and back are narrower than those of the neighbouring seats, and the legroom available to its occupant is limited due to the way the dash bulges outwards.

Flip the back down and it turns into a desk with an elasticated band to keep paperwork in place, a removable A4 clipboard that can be fixed vertically to face either the driver or the passenger, and a cupholder. Space is also created that allows a laptop to be stowed safely.

Did we mention cupholders? There is one at each extremity of the fascia plus a third in the middle next to the gear lever, which has to be folded down before it can be used.

One of Trafic’s cleverest features is housed in the passenger-side sun visor. It is a wide-angle mirror that enables the driver to see what or who is lurking in the van’s nearside blind spot. A cyclist sitting there could be hit if the driver – unaware of their presence – turns left.

Disc brakes are fitted all round – ventilated at the front, solid at the back. Alongside ABS with electronic brakeforce distribution, the Trafic’s built-in safety systems include electronic stability control with load adaptive control, which automatically adjusts its performance in line with how much weight the van is carrying, and hill-start assist.

Press a button on the dashboard and Grip Xtend will cut in should you require better traction on soft ground.

What the Trafic does not have, however, are some of the safety devices now appearing on other vehicles, such as lane departure warning and automatic emergency braking with pedestrian detection, for example.

Turning to the suspension, MacPherson struts with an anti-roll bar are fitted at the front. A twist-beam suspension set-up, with hydraulic dampers and a Panhard rod to aid lateral location of the axle, helps support the rear.