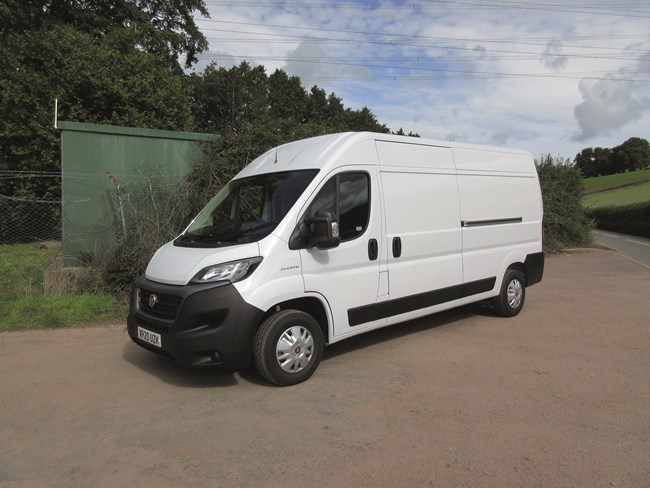 While much of today’s focus is on electric light commercials thanks to recent government announcements, the internal combustion engine is far from being dead. The battery-electric Fiat Professional Ducato has attracted plenty of attention, but the diesel versions of the revised front-wheel drive Ducato will comfortably outsell it for some time to come.

Another key change to the 2.3-litre, helping it deliver more torque and more mid-range power, is the introduction of a new turbocharger.

Also fitted is what Fiat Professional refers to as an EcoPack, which is standard. It includes changes to the alternator and fuel pump, which is electronically controlled, plus a start/stop system.

The manufacturer has introduced automatic transmission for the first time. The optional nine-speeder features three different driving modes (Normal, Eco and Power) and two different operating modes (Drive and Autostick). Stick with the first and the box works like a conventional automatic. Switch to the latter, and you can hold onto a lower gear if you are, for example, climbing a steep hill with a heavy load.

The Ducato is also being made available with a variety of different safety packages and driver aids, including Blind Spot Assist and Lane Departure Warning System.

One handy feature is the engine idle preset, designed to increase the engine’s minimum revs to power any additional electrical equipment that may have been installed. Another is the installation of more-powerful LED cargo area lights, which are available in three different sizes according to the vehicle’s wheelbase.

Worthy of note is the availability of a new infotainment package with a 7in touch-screen, USB port and DAB radio with remote controls located on the steering wheel.

Apple CarPlay is integrated into the package and it is also compatible with Android Auto. The built-in navigation system allows the Ducato’s dimensions to be inputted, meaning that streets that are unsuitable for a vehicle of its size can be avoided. This is a remarkably bright idea, which should help prevent drivers from getting embarrassingly stuck in tight spots.

Sharing the same basic design features as Peugeot’s Boxer and Citroen’s Relay – though not their engines – the Ducato is produced with three different wheelbases and three different heights. Load cubes range from 8.0m3 to 17.0m3, gross weights extend from 3.0t to 4.25t, while payload capacities range from 1,060kg to 2,140kg.

It is also produced as a crew van with a rear cargo compartment, a window van, a chassis cab, a chassis crew cab and a platform cab. The Ducato is additionally available as a dropside, an end tipper and a three-way tipper. There are three trim levels on offer – Standard, Tecnico and Sportivo – plus the Shadow special edition.

We got to grips with a 3.5t, long-wheelbase high-roof Ducato 35 with 140hp on tap and Tecnico trim. So, how did it fare?