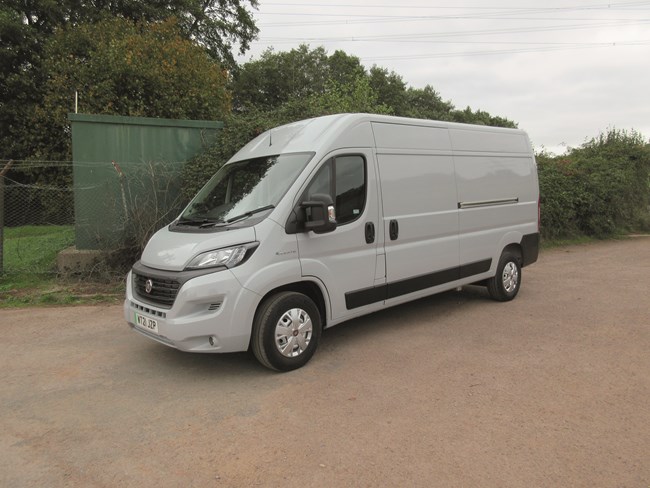 Contrary to popular belief, not all prospective buyers of electric vans are kept awake at night by range anxiety.

While some want to travel as far as they possibly can before they need to plug their vehicle in to a charging point, others are perfectly happy with a range of 60 to 70 miles because that is all they ever do in a day. They would prefer to save money by specifying a smaller battery that may be quicker to charge and allow them to carry a bit more weight because it is lighter than its longer-range counterparts.

Sensible manufacturers cater for both requirements, and that is the approach  Fiat Professional is pursuing with the new E-Ducato.

It can be ordered with either a three-module 47kWh or a five-module 79kWh battery, both of which are available with either an AC or a DC charging capability.

The former delivers a 139-mile WLTP (Worldwide Harmonised Light Vehicle Test Procedure) range on city work, while the latter can get up to 230 miles in an urban environment, says the manufacturer. A regenerative braking system helps replenish the battery in both cases, and both batteries feed a 90kW (122hp) motor. E-Ducato is up for grabs in van, chassis cab and passenger-carrying guise, and both batteries can be specified in all models.

Two levels of trim are marketed – standard and eTecnico. It is worth noting that Fiat Professional has devised an app entitled Pro Fit by E-Ducato, which it says recommends the ideal E-Ducato configuration to best meet customers specific needs based on real-world usage data.

Charging times from zero to 100% are typically just under five hours for the smaller of the two batteries, rising to nearly eight hours for the bigger one using an 11kW AC on-board charger. With a 50kW DC charger, the smaller battery can be charged to 100% of its capacity in just 50 minutes, says Fiat Professional, rising to an hour and twenty minutes for its larger stable-mate.

The 11kW charger is included in the deal with the 79kWh battery and with 47kWh eTecnico models. The entry-level standard 47kWh E-Ducato comes with a 7kW charger. We got to grips with a long-wheelbase (4,035mm) high-roof van with a 13m3 load area, the 47kWh battery said to be good for a 102-mile combined WLTP range, and in eTecnico trim. Even with the government’s plug-in van grant taken into account, it carries an eye-watering £54,425 basic price tag. So is it worth it?