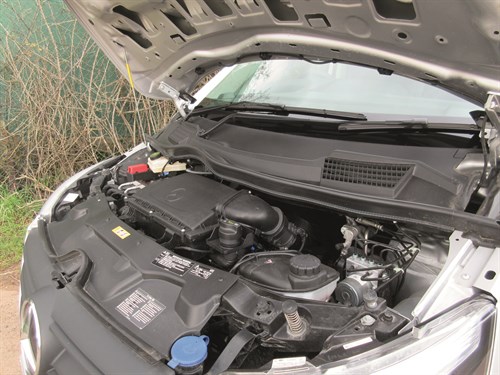 You’ll find the filler point for the 24l AdBlue reservoir beneath a flap close to the passenger door which also conceals the diesel filler point.

What immediately strikes you as you settle down behind the steering wheel and close the cab door with a reassuring clunk, is Vito’s remarkably high build quality. It is very solidly built indeed, feeling at times as though it has been carefully sculpted out of a solid block of metal.

This solidly transfers itself to the van’s on-the-road behaviour – the vehicle feels stable and well-planted, with little likely to shake it.

Its handling is exemplary. Push it hard through corners and it keeps hanging on in there, with no indication (unless you do something really silly) that it is about to break away, or that the driven wheels are scrabbling for grip. Body roll is kept well under control.

With 136hp on tap performance is not an issue, even when you are heavily-laden. Vito nips away from rest briskly, accelerates steadily through the gears, and happily maintains motorway cruising speeds.

Rather more of an issue is the quality of the gear change and the ride. Both could stand to be smoother – we suspect the suspension needs retuning in order to cope with the vagaries of Britain’s road surfaces – and in-cab noise levels are too high; a criticism What Van? regularly levels at light commercial vehicles.

Something we cannot come to terms with is Mercedes-Benz’s continued use of an-eccentric parking brake. You press a small pedal next to the clutch pedal to set it, then pull a lever at the bottom of the dashboard to release it with the accompaniment of a loud bang.

We wonder, why not fit the sort of electric parking brake increasingly found on other vans? Better yet, why not find some way of installing a conventional handbrake lever?