What Van? Awards 2019: Driver of the Year – Rachael Muncaster

Until the roads are populated by autonomous vehicles, it goes without saying that fleets operating vans are heavily dependent upon their drivers.

To recognise this fact for 2018 we introduced the What Van? Driver of the Year Award.

For the category’s second outing the winner has once more been drawn from a shortlist of exceptional individuals, compiled after studying driver performance data supplied by Lightfoot, the in-cab driver-training technology provider.

The 2019 recipient of this important award is Rachael Muncaster, a senior learner
support assistant for the North East Autism Society.

A key part of Muncaster’s role is to regularly transport young autistic adults to and from activities, so her ability to drive safely is of paramount importance.

One of the frequent journeys Muncaster makes in her nine-seater Vauxhall Vivaro is taking students to their volunteer work placements at the society’s shop in Sunderland’s city centre.

Being able to carry the students to their placements safely allows them to develop new skills, such as money-handling and socialising with customers out in the community.

Commenting on her role, Muncaster says: “As a senior learner support assistant, I take road safety very seriously. I have a duty of care to the young adults I’m supporting and it’s essential that I make their journeys as safe and comfortable as I possibly can.”

Jessica Greer, fleet manager for the North East Autism Society, adds: “Driving a multi-person vehicle can be a challenge. But driving it carefully, all the while being mindful of the care and challenges associated with autistic young people who are passengers, is a true test of ability.”

Lightfoot uses an in-cab traffic light display to encourage safer and environmentally friendly driving by highlighting dangerous and inefficient actions such as harsh braking or severe acceleration. The aim is to stay in the ‘green’ through driving smoothly.

Lightfoot claims its customers typically save up to 20% on fuel bills while cutting emissions by a similar amount and reducing accident rates by 60%.

The society’s decision to install Lightfoot technology into its vehicles was driven by a need to reduce accidents and repair costs and Greer says Muncaster embodies the new professionalism as a model driver and Lightfoot advocate.

“As a learning support assistant with young adults one of the things we love most is the fact she involves the young people in her care in the process of listening to, and following, Lightfoot’s guidance,” says Greer.

As an elite driver, Greer says Muncaster’s students are used to the audible praise offered from the Lightfoot tracker – following it with roaring applause. They also let her know when she gets a very occasional nudge from the driver training device telling her she could do better!

Muncaster admits that the technology from Lightfoot has improved her driving, particularly
in terms of curbing speed, braking less harshly and finally cornering more smoothly.

Taking second spot in this category, in a hotly contested shortlist, is Stephen Baylis, who drives a short-wheelbase Ford Transit for Virgin Media, which has been fitted with Lightfoot technology for just over a year.

Baylis says the driver training aid has encouraged him to change gear a bit earlier than he used to, which is all-important as it has enabled him to get more miles between fuel fill-ups.

Mike Cosgrave, network operations manager at Virgin Media, says Baylis sets an excellent example as to what you can achieve when working with the Lightfoot system, which is reflected in his driving performance.

He says Baylis has maintained his elite driver status while working across a wide area of the north-west of England and making weekly round trips of 200 miles further north.

Baylis adds that using Lightfoot at work has also encouraged him to drive more efficiently in his own car. 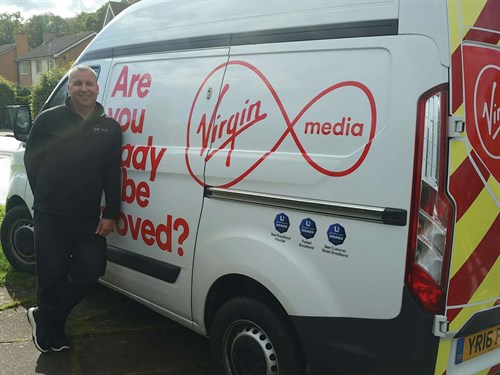