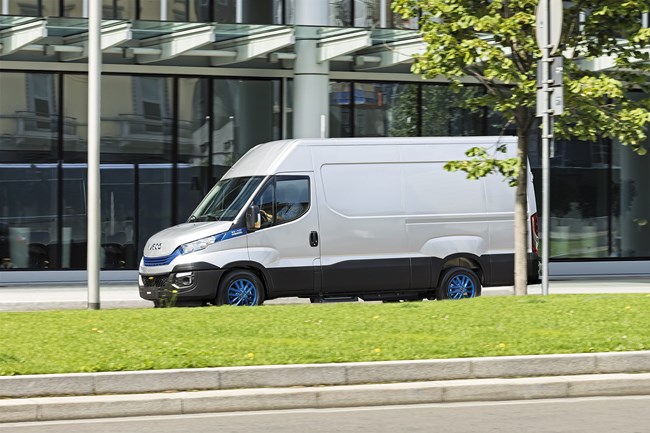 Iveco is convinced that natural gas has major potential as an environmentally-friendly alternative to diesel and is promoting it energetically.

At the same time it is aware that other sources of propulsion represent viable low- or zero-emission solutions – and it is determined not to neglect them.

The stance it is taking is represented by Daily Blue Power, which denotes a selection of models designed with minimal impact on the environment in mind. It is the winner of this year’s What Van? Editor’s Choice award.

The line-up includes the Daily Hi-Matic Natural Power, the first light commercial vehicle fuelled by compressed natural gas (CNG) with an eight-speed automatic gearbox, a transmission worthy of praise on its own. Power comes courtesy of a 136hp 3.0-litre engine.

So how much cleaner is it than, say for example, Iveco’s standard 3.0-litre Euro6 diesel?

Well, it generates 76% fewer particulates and 12% less NOx – nitrogen oxides – says the manufacturer, not to mention 5% less CO2 thanks to the Hi-Matic transmission.
Run the gas engine on biomethane made from waste – food industry waste for example – and the CO2 cut rises to a hefty 95%.

CNG has less energy content than diesel and the vehicles that burn it are more expensive than their diesel-powered counterparts. The fuel is cheaper than diesel, however, leading to potential cost savings of over 35%.

Hi-Matic Natural Power is also quieter than its diesel equivalent, which means it has an advantage for deliveries being made late at night.

Also available is the Daily Electric. Battery-powered, it is said to have a range of up to 125 miles and its battery pack can be recharged in just two hours if you have access to a fast-mode charger.

Forming part of the line-up too is the diesel Daily Euro6 RDE Ready, which already meets the tough new Real Driving Emissions regulations due to come into force in 2020. With stop-start as standard and fitted with low rolling-resistance tyres, it uses up to 7% less fuel than the standard diesel model, says Iveco.

Daily Blue Power thoroughly deserves the Editor’s Choice accolade, and the award is a timely one. Local authorities look set to impose ever-tighter restrictions on what is and is not allowed into their city centres from an emissions viewpoint over the next few years. Furthermore, corporate customers will increasingly want to know what a business that is providing them with goods and services is doing to shrink its own carbon footprint in line with their own publicly stated policies.

Adopting Daily Blue Power models or their nearest equivalents from other manufacturers could be the answer. Says Iveco brand president, Pierre Lahutte: “In the face of the current push for decarbonisation and increasing access restrictions in cities, being sustainable is fast becoming an important competitive advantage for transport businesses.”

A summer tyre with sufficient winter capability to enable van operators to rely on it year-round without having to switch to dedicated winter tyres when snow is on the ground, Michelin’s Agilis CrossClimate scoops our Highly Commended prize.

Launched last May, its performance is delivered by a highly effective tread rubber made up of three different synthetic compounds. Also playing its part is a big, bold and distinctive V-shaped tread pattern.

Constructed with two layers, the tread is designed to minimise heat transfer through the tyre. The blocks contain bi-directional self-locking sipes – grooves for draining away water and improving traction. They are also intended to provide cutting edges, which bite into snow and ice.

British Gas is having Agilis CrossClimate tyres fitted to its entire van fleet.

What is more, fleet management company Total Motion has recently opted for it for some 70% of its portfolio – 17,500 vehicles – after predicting Agilis CrossClimate will deliver an extra 3,000 miles per set. That is compared with its established summer/winter tyre policy, which involved tyres being swapped in line with the changing seasons. 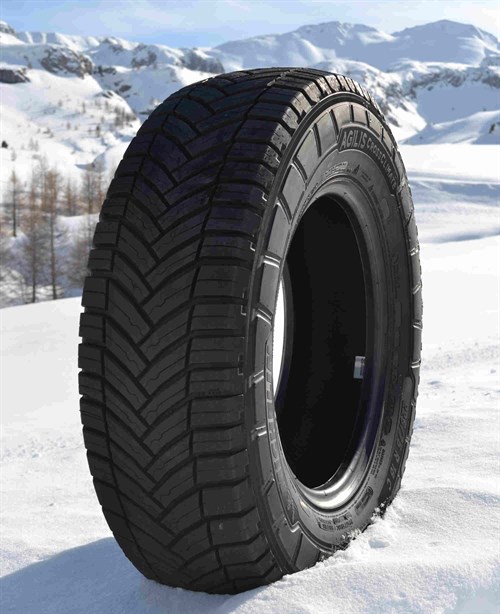