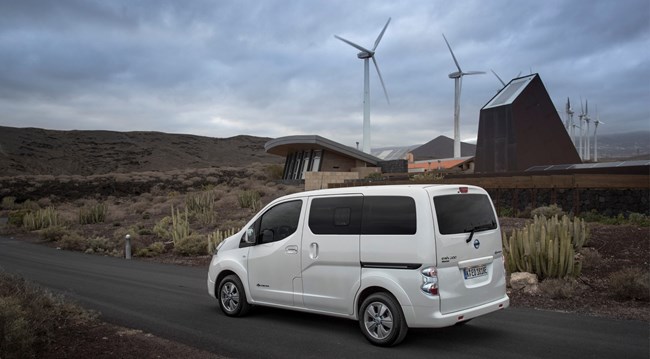 Since it first arrived in 2014, the Nissan eNV200 has been a pioneer of electric motoring, with companies falling over themselves to incorporate them into their fleets.

While the Nissan Leaf may be a more familiar zero-emission model, the electric van has gained in popularity in no small part thanks to its upgraded battery pack. Previously fitted with a 24kWh pack, the new 40kWh battery has boosted range to a claimed 174 miles, making the realistic range in excess of 100 miles.

That’s a 60% increase over the smaller battery. The increased distance has not only broadened the audience for the eNV200 but importantly assuaged a lot of the range anxiety fears owners and fleet managers had. Despite a larger-battery capacity, the cells are still located in the floor, ensuring that the load volume is not compromised and the 4.2m3 capacity of the diesel version remains intact. A truly impressive maximum payload is hampered by the weight of the batteries, but the eNV200 is still able to move 701kg.

Fast charging has also played a part in increasing the acceptance of the eNV200. With a full charge on a 32A wall box taking more than eight hours, a high-capacity charge point can reduce that time to four hours – however, a CHAdeMO quick-charge point will allow up to 80% of the battery to be charged in just 30 minutes.

An Eco mode also helps improve the range of the vehicle, limiting the acceleration of the van to ensure the battery is not drained unnecessarily while also recovering more energy while coasting and braking.

We drove the upgraded eNV200 and found the Eco mode to be a welcome addition to the overall driving electric experience because it encourages much greater awareness and forward planning in order to maximise the regenerative potential of slowing the van.

Without Eco mode, the eNV200 is quick off the mark while the floor-mounted batteries help to lower the centre of gravity, giving the high-sided van a more planted feel than when equipped with a diesel engine.

As connected technology becomes ever more prevalent, the eNV200 is also getting in on the act with its CarWings system. Not only does it allow “pre-conditioning” of the cabin temperature to ensure the vehicle is ready to go and doesn’t waste battery charge unnecessarily, it also allows remote monitoring of the battery charging status. Combined with Nissan’s Vehicle to Grid technology that allows the eNV200 to feed back into the local energy grid, there should be no reason why your affections for the eNV200 will ever go flat.

Adding to its existing electric portfolio of the Kangoo Z.E. and Twizy, Renault has become the first manufacturer to deliver an off-the-shelf fully electric 3.5t van.

The Renault Master Z.E. is equipped with a 57kW (76hp) electric motor and a 33kWh battery pack that is also found in the updated Zoe passenger car, giving the Master a claimed range of 124 miles (200km).

While in the real world that figure will likely be closer to 60 miles, it still doesn’t detract from the fact that the Renault Master Z.E. – with a 1,100kg payload capacity and four body types, three lengths and two heights – is a very attractive proposition for operators looking to go green. Eric Feunteun, vice-president of the Renault Electric Vehicle Programme, believes that customers looking to buy a zero-emissions Master are less focused on payload and instead want higher volume capacities, hence the wide choice of variants.