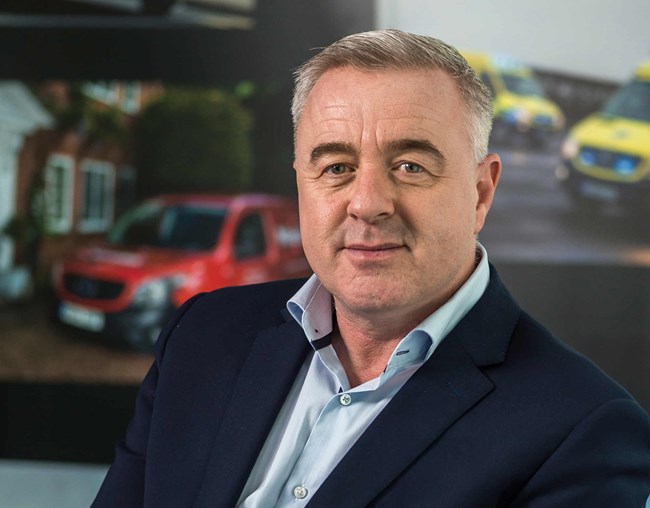 Steve Bridge is not afraid to embrace change. As managing director of Mercedes-Benz Vans UK, he realises that digital technology is having a massive impact on the way in which businesses acquire vans, operate them, have them serviced and repaired, and dispose of them; and he is helping to ensure that his company is responding accordingly.

Nor is he afraid to learn lessons from other sectors of commerce: if pop-up restaurants can work in Britain’s big cities, then why not pop-up van dealerships?

Bridge’s ability to think innovatively is a key reason why he has been admitted to the What Van? Hall of Fame. So is his constant focus on the needs of the customer.

“Why does [parcel delivery brand] DPD buy Mercedes?” he mused in an interview with What Van? editor James Dallas in early 2018. “The decision is led by TCO: total cost of ownership.”

In other words, what matters is not a rock-bottom front-end price – he is not interested in buying registrations and market share for the sake of it – but an operating cost that is competitive, backed by strong residual values.

His awareness of how much these concerns matter to operators grew in the more than 10 years he spent working for finance firm GE Capital and vehicle hire company Lex Transfleet prior to joining Mercedes-Benz UK in May 2000. Having been a customer himself throughout the 1990s he is well aware of the challenges customers face, and can view issues from both sides of the fence.

In that role he had to cope with the impact of the financial crash on the van market. What Van? contributing editor, Steve Banner, interviewed him in February 2009, when he said that while the level of inquiries for Mercedes-Benz vans was high, the difficulty was getting customers to commit themselves at a time of uncertainty.

“Their willingness to do so is dependent on the confidence they have in their own businesses,” he observed. A decade later, the key cause of uncertainty is Brexit, and Mercedes-Benz Vans is fortunate to have somebody at the helm who has shown in previous challenges that he is more than capable of being able to cope.

One highly practical way in which Mercedes-Benz Vans has embraced the internet manifested itself last June with the launch of a new website for its ServiceCare maintenance plans. Visitors to the site can view available plans based on the age of their vehicle, model and transmission, which can be entered manually or brought up by entering the registration number. They can then interact with the duration of the plan and number of services to configure a programme that best suits them and their vehicle. Once they have chosen their plan, they can either buy it online or contact their Mercedes-Benz Vans dealer about setting up a direct debit.

And those pop-up dealerships?

The first one appeared at the Intu Trafford Centre in Manchester last February, next to the Apple shop. “It was the first time our brand had ever been located in such a retail environment, so it really set our stall out to those consumers who may never have experienced what we’re all about,” he says.

In November one appeared at the Bluewater shopping centre in Kent, showcasing the X-Class pick-up Storm Edition, with X-Class test drives available. Visitors could test-drive the Vito too as well as learn about everything from electric vans – battery-powered Mercedes light commercials are on their way – to delivery by drone, an idea Mercedes has been trialling in Switzerland.

“The success of our first pop-up store proved that we have the right formula to build on,” says Bridge. “We’re taking our brand out to people rather than expecting people to come to us. “No other van manufacturer has been as bold and bullish in promoting its brand.”