The What Van? Light Commercial Vehicle of the Year Award for 2019 goes to a trio of vans built on the same platform that are set to have a profound impact on the UK market.

Although PSA Peugeot-Citroen and Opel/Vauxhall announced more than three years ago that they were to team up for the production of their next light van ranges, PSA’s subsequent acquisition of the Opel and Vauxhall brands, which were formerly owned by General Motors, in 2017, has added more significance to the move.

By combining their resources they have become a major force to be reckoned with in the industry, and the new Citroen Berlingo, Peugeot Partner and Vauxhall Combo are the first products to emerge from what is now Europe’s second-largest automotive group.

Thanks to our partnership with the International Van of the Year (IVOTY) we have been at the front of the queue in getting the chance to run the rule over the new models and can attest that PSA has raised the bar in terms of driveability and load-carrying practicality.

Payloads go up to a class-leading 1,050kg while load volume extends to 4.4m3.

Power for all three vans comes initially from a choice of two diesel engines. Due to emissions regulations, a 1.6-litre Euro6.1 engine will be on sale in some markets, including the UK, for the first nine months of production – however, a more powerful (and far more impressive) but smaller-capacity 1.5-litre BlueHDi Euro 6.2-compliant engine will also be available at launch with a 130hp output.

The good news is that this newer engine will supersede the 1.6 and still be available with the same 75hp and 100hp outputs.

Urban operators in particular will also find it worthwhile considering the 1.2-litre Puretech petrol engine with 110hp and 130hp outputs, which will join the line-up in 2019. The higher-powered petrol engine will get the slick new EAT8 auto transmission. This gearbox is also available on the 130hp diesel model and incorporates a stop function with the adaptive cruise control that allows the vehicle to slow to a standstill and then resume the cruise when in traffic. A five-speed manual transmission is fitted as standard on both 1.6-litre models, while the 1.5-litre unit gets a six-speed manual.

As a compact van, it is likely to spend a high proportion of its time in the city where a quiet, capable engine pays dividends. The Euro6.2 1.5-litre unit certainly delivers on this. There’s plenty of sound-deadening to mute its four-cylinder patter, but even from the outside it sings a discreet song. Vibrations through the cabin and steering wheel are minimal too.

It’s a classy engine that matches the rest of the improvements.

During its limited period of service the slightly larger 1.6-litre Euro6.1 unit will prove to be a credible powertrain for the van, but the six-speed manual mated to the 1.5-litre engine is better, with the extra ratio particularly welcome on higher outputs and for motorway cruising.

The auto transmission however, is the true gem of the range. It’s fast and smooth and will be a boon to drivers spending their time in stop-start city traffic. Having sampled the whole range we would conclude it is models with this transmission that best typify the progress and strides in sophistication that the trio of PSA light vans have made.

A pair of new-to-segment technological enhancements also worth flagging up are the onboard weighing system and the surround rear-vision camera. The first alerts you to the fact that you are at 80% of your total weight capacity, and then again when you are overloaded. The second system gives you a rear, side and reversing camera view of what is around you on a five-inch colour screen positioned in place of the rear-view mirror.

The overload indicator is standard on the more rugged workhorse models from the French brands – Grip and Worker in Peugeot and Citroen speak respectively – and can be specified as part of the Construction Pack on the Vauxhall Combo. 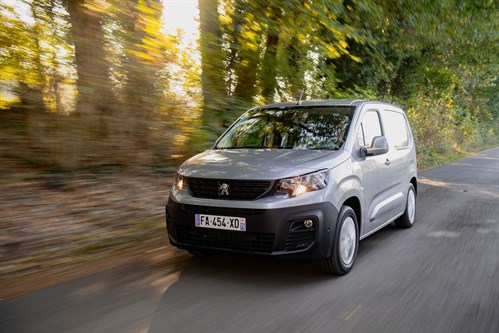