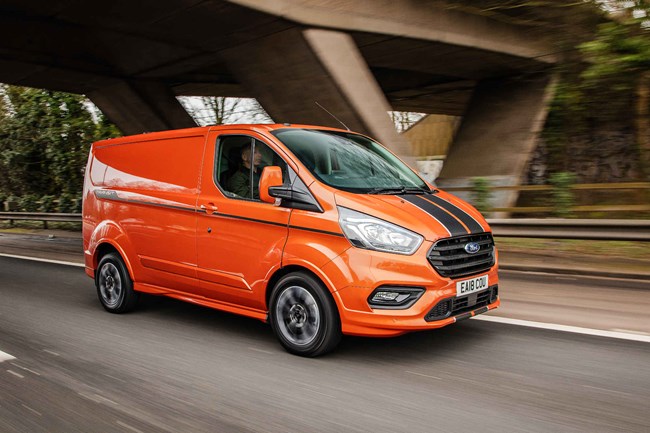 The winner of the medium van accolade is the UK’s best-selling commercial vehicle by a considerable distance.

The Transit Custom has dominated its sector since it burst onto the scene to rave reviews in 2012, bringing unprecedented style, road-handling characteristics and innovative load-carrying solutions to the market.

Having got Euro6 engines in 2016, in the first half of 2018 Ford gave the Custom a comprehensive facelift.

The engine line-up is based on the 2.0-litre Ecoblue with outputs of 105hp, 130hp and 170hp, but new to the range when it came on board in the summer was the Econetic (based on the 105hp unit), which delivers an official 49.6mpg with CO2 of 148g/km – a 6% improvement over the most efficient previous van. Available in short-wheelbase form only, the Econetic features a unique engine calibration, auto stop-start, low rolling-resistance tyres, Ford’s Acceleration Control device and a fixed 62mph speed-limiter.

Ford has given the updated Custom a new front end with a three-bar upper grille that ties in with the design of the Fiesta and Focus cars, according to Chris Hamilton, chief designer for Ford of Europe. He says durability has been enhanced by the addition of a protective, removable panel to guard against scrapes to the underside after Ford discovered the original Transit Custom would occasionally ‘ground’ when traversing speed humps and ramps. Hamilton also draws attention to a new more aerodynamic fender design, but it is to the interior that Ford has made the biggest changes with the introduction of more storage space, and tech carried over from the car range.

The driving position is as good as it gets in an LCV, rake and reach steering adjustment is included on all Custom variants, and the short gear stick is within easy reach of the driver. The manual gear change is snappy and precise and arguably offers a more dynamic drive than the six-speed auto. The steering wheel is small, while the steering itself is nicely weighted and directs the van exactly where you want.

There are no slouches in the Custom range but the 170hp engine in the Sport is the pick of the bunch, delivering the sort of performance more readily associated with hot-hatch passenger cars, while a payload of more than 800kg and a 6.0m3 load space in the smallest L1H1 version is testament to the model’s practicality too. Load-carrying chops in the line-up extend to 8.8m3 and 1,379kg.

In the cabin, which pre-facelift was criticised for lacking stowage space, Ford claims the instrument panel alone now offers 25 litres of storage.

The manufacturer says the user-centric interior layout was influenced by consumer use of smart devices. Flagship models get a floating, tablet-inspired eight-inch colour touchscreen with Ford’s Sync 3 communications and entertainment system, which can be operated with pinch and swipe gestures.

The facelifted model is the first LCV in the line-up to get Ford’s Intelligent Speed Limiter, which allows automatic adjustment of maximum speed to remain within legal limits via the Traffic Sign Recognition system. Other new safety kit includes Blind Spot Information System with Cross Traffic Alert, which warns drivers reversing out of a parking space of vehicles about to cross behind them.

The platform-sharing Peugeot Expert, Citroen Dispatch and Toyota Proace (pictured) were joint winners of the LCV of the Year prize in 2017 and retained the Medium Van accolade in 2018.

It is testament to the relentless raising of the bar in the sector that this time out these excellent models have to settle for the runners-up spot.

The three vans are distinguished by brand styling differences, but a strength the trio share is a broad range comprising one roof height and three body lengths, including compact versions that broke new ground in the sector. These are 4.6m long, have a 5.1m3 load space and a meaty 1.0t payload. A tight turning circle of 11.3m makes them ideal for city applications.

The Peugeot and Citroen models are available with 1.6- and 2.0-litre BlueHDI powertrains with outputs ranging from 95hp to 180hp. The Toyota Proace shares these engines but peaks at 120hp in panel van form. 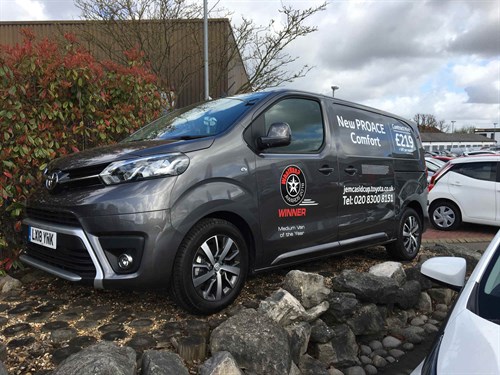