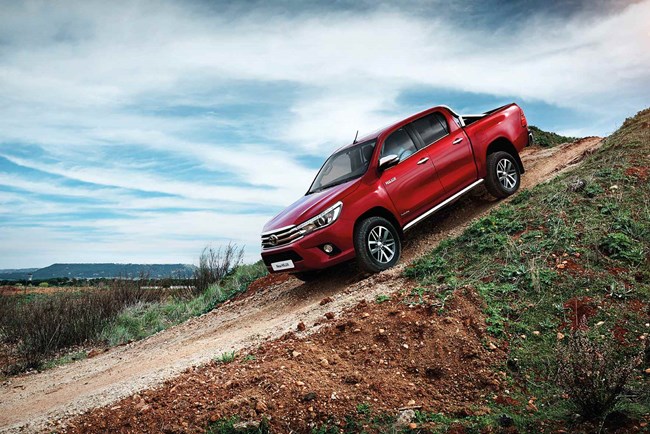 Having first appeared in 1968 and with around 18 million examples shifted since then, the Toyota Hilux has, in the past 50-plus years, gained a legendary reputation for its almost indestructible toughness.

It is one of the few light commercial vehicles that can make a genuine claim to hold iconic status.

In the BBC motoring show Top Gear, a 1988 fourth-generation Hilux famously survived being parked on a beach to face the tide coming in and left on top of a building that was in the process of being demolished and set on fire. Despite this abuse the Hilux was still able to run after being repaired with the tools found in the truck’s toolbox.

In a later episode of Top Gear a modified 2007 Hilux was driven from northern Canada to the magnetic North Pole, making it the first motor vehicle to make it there.

Not content with reaching the North Pole, in 2009 the support crew for the participants in the Amundsen Omega 3 South Pole Race achieved a world record travelling in Toyota Hiluxes adapted by specialist all-terrain conversion firm Arctic Trucks when they completed a trip of over 3,100 miles from Novo, a Russian scientific station in Antarctica, to the Geographic South Pole and back, making the trucks the first 4×4s to reach the South Pole.

The return trip of 1,600 miles was completed in a record eight days and 17 hours.
A more disquieting consequence of its ability to withstand extreme punishment is that the Hilux has also become popular with military groups and can often be spotted in the background on TV news broadcasts covering war zones.

Toyota celebrated the 50th anniversary of the Hilux with a promotion housing a limited edition model in a glass box with the tag line ‘Break in case of apocalypse’. Also built in partnership with Arctic Trucks, the 50 models boast raised front and rear suspension with Bilstein performance dampers to give increased ground clearance and off-road capability, 16 x 7.5in alloy wheels with BF Goodrich all-terrain tyres, a double-hoop sports bar over the cargo bed with an array for four high-power Vision-X LED spotlights, wider front and rear wings, Arctic Trucks-branded mudflaps, and Invincible 50 badging on the body and in the cabin.

Now in its eighth generation, the Hilux continues to thrive in an increasingly competitive segment. In 2016 the brand replaced the truck’s 2.5-litre engine with a more powerful 148hp 2.4 lump. It also upgraded the chassis strength and added 100mm larger leaf springs to help give a smoother ride on road. Since then the manufacturer has also added a raft of driver assistance equipment that includes autonomous braking, adaptive cruise control, lane departure warning with corrective braking, and road-sign assist.

Excluding special editions, the Hilux specification walk starts with Active, then progresses through Icon and Invincible before it reaches Invincible X.

To Toyota’s credit, it still offers the exclusively four-wheel drive Hilux in the traditional workhorse single- and extended-cab guises as well as in the double-cab format that has come to dominate the pick-up market in the UK.

As at home on-road as it is off the beaten track, the Hilux’s all-round ability shows how Toyota’s decades of experience has produced an outstanding pick-up that is capable of working in all manner of terrains.