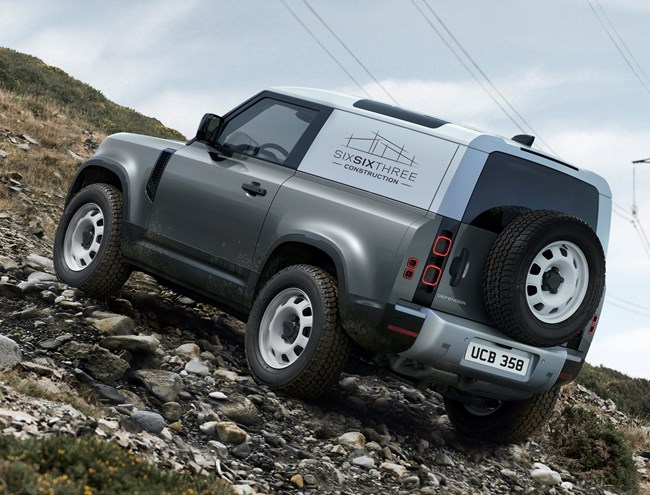 There was much lamenting in the light commercial vehicle community when Land Rover withdrew its legendary Defender in 2016.

Perhaps the only ones pleased to see the back of the iconic old workhorse were rival 4x4 manufacturers, so there was considerable excitement when news broke in 2019 that Land Rover was to resurrect a commercial derivative of the model.

Fans of the old Defender may grumble that the born-again version, which came to market early this year, has lost its rough and rugged charm and it is true it has undoubtedly moved closer to its Discovery Commercial sibling.

As such, it is a world away from the original in terms of refinement and driveability and we are certainly not complaining about that.

Like the previous commercial Defender, the Hard Top is a car-derived van. The side windows are replaced with unglazed panels and the rear seats have been removed to create a flat-floored, rubber-lined load space featuring up to six integrated lashing hooks to secure loads. A full-height bulkhead with a mesh window separates the cabin from the cargo space and includes four hanging hooks on the load side. Access to the load area in the three-door, short-wheelbase Defender 90 Hard Top is via the side-hinged rear tailgate only, but the load space on the long-wheelbase Defender 110 Hard Top can also be reached, albeit awkwardly, through its rear side doors.

There’s a 58l underfloor stowage area at the rear of both models, while the 110 also gets an ingenious 155l area where the rear footwells would be on the passenger-carrying vehicle. All Defender Hard Tops are all-wheel drive and come with eight-speed automatic transmission with a twin-speed transfer box wedded to a 3.0l engine.

The 90 is powered by a 200hp diesel powertrain, while the 110 gets either a 249hp or 300hp diesel. All are equipped with mild hybrid systems, and meet the RDE2 and Euro 6d-
Final standards.

The Defender has a wading depth of up to 900m, which beats every pick-up on the market, and a towing capacity of 3,500kg.

Land Rover’s Special Vehicle Operations division converted both versions and is also responsible for the Discovery Commercial 4x4, which was the brand’s sole LCV product during the Defender’s absence. The 110 Hard Top is close to the Discovery in terms
of luxury but customers opting for the 90 Hard Top certainly should not feel short changed.

As the utilitarian member of the family, it gets 18ins steel wheels with all-season tyres and a full-size spare plus tough rubber floor mats ideal for planting muddy boots on. It also features part-electric, eight-way adjustable seats, a heated windscreen, 10ins touchscreen, Connected Pro satnav, Apple CarPlay and Android Auto, a 140W soundsystem with four speakers, DAB radio, a 3D surround camera including an excellent off-road forward facing camera that allows the driver to see over the brow of a hill before making a steep descent, a 360º parking aid, wade sensing and adaptive cruise control with speed limiter.

The 110 offers electronic air suspension with adaptive dynamics as an option, while the 90 only comes with coil springs. The former is not only suitably comfortable but removes any wallowing when taking corners.

The new Defender is smoother and more rounded than its forebears, and unrelatable in terms of driving characteristics. The slick auto transmission gets the most from the ample power available. The steering is unerringly precise and refinement is beyond reproach, with no vibrations or road noise disturbing the vehicle’s serene progress.

Last but not least, the Defender Hard Top is immensely competent off-road, with digital controls allowing the driver to choose the best settings for the conditions from the terrain response system. All of which allow the vehicle to offer a smooth and impressive drive. 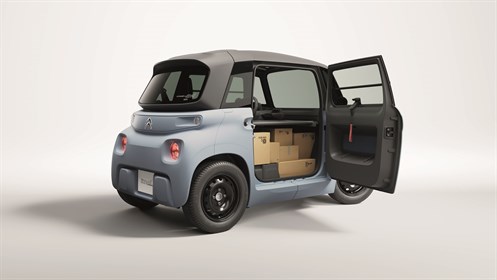 Citroen is to bring a commercial version of its electric city car, the Ami, to the UK next year. The tiny Ami Cargo Electric features a payload of 140kg and a load capacity of 0.4m3, with the passenger seat installed in the two-seater car version being replaced with a seven-part polypropylene module for carrying goods.

The Cargo Electric has a vertical partition between the driver and cargo area, and a secondary modular shelf unit capable of holding 40kg, which can be converted into a desk when parked. There is also a two-way adjustable floor allowing the vehicle to carry larger items.

The Ami Cargo Electric has a 5.5kWh battery pack, allowing up to 46 miles of range on a single charge, with a full charge taking up to three hours.