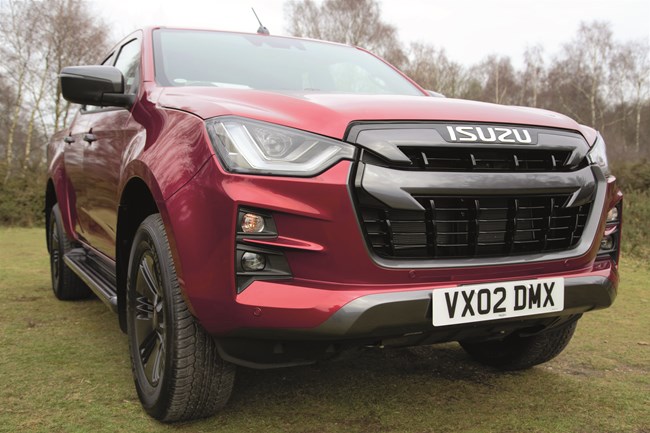 Isuzu’s D-Max has regained the prize it surrendered in 2021 following a hat trick of Pick-up of the Year wins leading up to and including 2020.

What impressed judges in the past was the full range of bodystyles Isuzu offered, including single-, extended- and double-cab, where many competitors went double cab-only
with an eye on the lifestyle market, allied to the truck’s impeccable credentials as a robust workhorse.

While the D-Max was able to hold its own at the higher end of the market with models such as the XTR and Blade, – by last year it was losing ground to its rivals.

This all changed with the arrival of the new D-Max at the start of the year.

There is also a 7in colour touchscreen with Apple Carplay and Android Auto connectivity, dual-zone climate control, and keyless entry.

Both the DL20 and DL40 are available with automatic transmission, which comes with adaptive cruise control and lane keep assist.

Further features of range-topping V-Cross trim include ‘gun metal’ exterior detailing, a 9in colour touchscreen with a CD player and eight speakers, an auto-dimming rear-view mirror, and automatic headlight levelling.

The D-Max, of course, retains its 1.0t payload and 3.5t towing capacity and has gained a class-leading wading depth of 800mm but it is this leap in refinement, sophistication and safety features that most impresses with the second-generation truck.

As standard, the new D-Max gets forward collision warning, autonomous emergency braking, traffic sign recognition, which combines with an intelligent speed limiter to alter speeds between zones, and lane departure warning, with a lane departure prevention system that, quite forcefully, adjusts the steering if you attempt to cross lanes without indicating.

Double-cab trucks come with a rear radar that enables additional ADAS features such as a blind spot monitor that detects vehicles in the driver’s blind spot and alerts the driver via an orange warning light in the door mirror. The warning light will flash if the driver indicates to move into the lane where a vehicle is detected. If the driver fails to take action, emergency lane keeping will adjust the steering to prevent the lane change. Double-cab trucks also get rear cross-traffic alert to detect vehicles approaching from the rear when reversing out of a parking space.

Automatic models come with lane keep assist and pedal misapplication mitigation, which suppresses engine torque and issues a visual and audible warning if the driver suddenly accelerates in front of an object. It works at below 5mph when an obstacle is within 4 metres to help avoid incidents at low speed – for example, if the driver is parked and selects drive instead of reverse.

A reworked leaf-spring suspension and a new chassis cab mount that absorbs more noise, vibration and harshness, has delivered a marked improvement in ride quality and enhances comfort in the cab while handling benefits from height and reach-adjustable steering wheel (long-overdue), speed-sensitive electric steering, and an eight-way electrically adjustable driver’s seat. 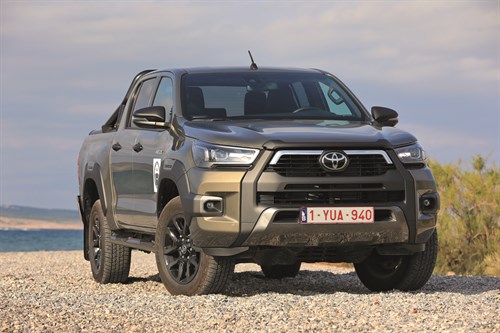 Toyota added a more powerful engine to its Hilux range as part of a facelift to the eighth generation of the model. The new 2.8l 200hp engine powers the flagship Invincible X Hilux, with either six-speed manual or six-speed automatic transmissions, and is also available on the Invincible version alongside the existing 2.4 150hp unit. The 2.8 drivetrain increases torque from 400 to 500Nm.

The facelift has brought better ride comfort due to tuning adjustments to the leaf spring suspension, improved steering with the introduction of a variable flow control system and better acceleration on low-grip surfaces in two-wheel drive mode, thanks to the addition of an auto limited slip differential. New features include an 8in touchscreen with Apple CarPlay and Android Auto, front and rear parking sensors from Invincible upwards and an updated navigation system and a JBL Premium sound system for the Invincible X.