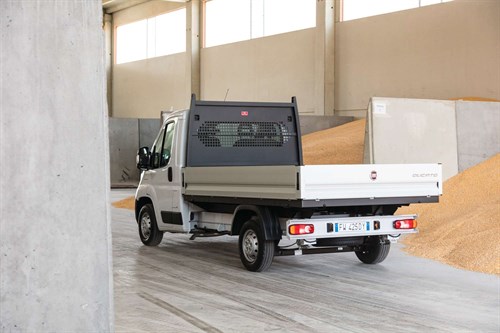 (continued from previous page) A new seven-inch infotainment and navigation touchscreen will join the range in September as will three safety features: blind-spot assist, which monitors the areas directly alongside and behind the van that the driver can’t see, alerting them to the presence of cyclists, for example; rear cross-path detection, which warns when vehicles, people or objects cross behind the van when it’s reversing; and full brake control, which applies the brakes if a collision is imminent.

Fiat has changed the Ducato’s nose to give the vehicle a ‘sportier’ look with a new grille and skid plate, but has also moved to improve ‘repairability’, with headlamps that it says are better protected and easier to replace, and a three-piece bumper, so that only the damaged section needs to be replaced rather than the whole component.

The facelifted Ducato comes in three heights, six lengths, with load volumes spanning from 8m3 to 17m3, a maximum payload of 2.1t, and a rear axle capable of supporting 2,500kg. It is available in four trims, Base, SX, Tecnico and Sportivo, and will be offered as a panel van, glazed and semi-glazed van, and as chassis and cowl cabs.

The manufacturer launched the Ducato in 1981 and a new-generation model is expected to break cover in 2021 under the Sevel Partnership with PSA, which historically has seen the Ducato, Citroen Relay and Peugeot Boxer produced at the Sevel Sud plant in Val Di Sangro, Atessa, Italy.

Following PSA’s acquisition of Opel/Vauxhall in 2017 the agreement going forward will also take in production of a large van for these brands.

In the meantime, Fiat has unveiled the Ducato Electric it is launching next year. It claims the EV offers almost the same versatility as the diesel Ducato range with load volumes of 10m3 to 17m3 and a maximum payload of 1.95t.

The manufacturer has upgraded its Talento medium van and Doblo Cargo light van engines to the Euro6D standard. The Talento comes with 1.6- and 2.0-litre engines with a top power output of 170hp replacing the 145hp unit, while torque on the 105hp 1.6 Doblo has been increased from 290Nm to 320Nm

The brand says it enjoyed its most successful year in Europe in 2018, where it claims the Ducato has led the large van sector for five consecutive years. This performance was not reflected in the UK, however, where overall sales fell 19% year-on-year to 8,751, according to the Society of Motor Manufacturers and Traders.