Isuzu always punched above its weight in the UK, but does the smaller-engined D-Max? 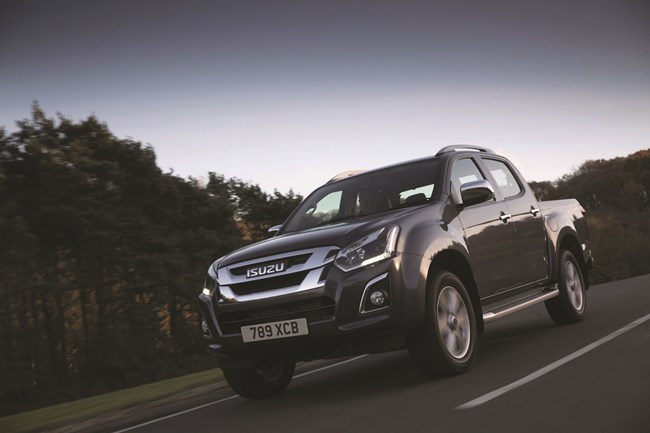 Introduced in 2002, the D-Max was Isuzu’s big-hope replacement for the worthy, if unremarkable, TF pick-up. This had carried Isuzu’s entire LCV aspirations on its shoulders (Isuzu Truck being a separate entity on these shores) since the company had abandoned the Trooper in commercial and passenger forms after the Mk II. Having all its eggs in the one TF basket had proved at best optimistic, and once committed to a pick-up-only future, Isuzu had to make the D-Max desirable. The carry-over engine, drivetrain and suspension underpinned interior upgrades, alloy wheels, eye-catching colours and accessories while taking a leaf from Mitsubishi’s book. They were topped off with some

butch-sounding derivates such as Eiger, Utah, Yukon and Blade. A facelift – covered here – came in 2017 – ushering in a smaller 1.9-litre diesel to replace the 2.5 version. The torque-rich Trooper with its thumping 3.0-litre four-pot was a distant, fond memory.

However, that would be to sell the D-Max short. The 1.9-litre lump offers exactly the same 163hp as its larger forebear, and although torque is slightly down it’s spread over a wider rev band and uses up to 15% less diesel to do it. Payload is a decent 1,100kg and the towing weight remains at 3.5t. That must be some kind of record in the gross train mass per cc stakes – even the new Defender has a full 2.0 litres. At the business end, Isuzu’s marketing blurb stated that the D-Max could carry six Suffolk sheep in the load bay, although it didn’t stipulate if they were shorn or not. Sticking to the metric system we get a load bay length of 2.33m for the single cab or 1.48m in double-cab guise, with load widths of 1.58m and 1.53m, respectively. That’s marginally better than the equivalent Nissan Navara or Mitsubishi L200.

The interior feel and finish is no match for the aforementioned rivals, but higher grades add a 7.0in touchscreen infotainment system in Yukon and Utah models, and a 9.0in version in the Blade. Both are aftermarket additions, and to be honest look like a bit of an afterthought, although the Utah and Blade include satnav. It’s all no match for a VW Amarok and the 4WD system is more basic, but it does have a hill-descent function.

Isuzu has a good name for reliability and at one time was actually the world’s largest producer of automotive diesel engines, so having a recall for camshaft drive gear failure is a little out of character. It only affected 1,102 of the 1.9-litre engines in the UK, but checking the recall was done is essential before buying. Overall, however, the standard five-year, 125,000-mile warranty and 12,000-mile/24-month service intervals bode well. That mileage interval may seem short, but arduous duty and old oil do not make happy bedfellows. Operators who use the D-Max hard always sing its praises – it’s a vehicle that instils customer loyalty it seems, and a smaller engine has not changed that one iota.