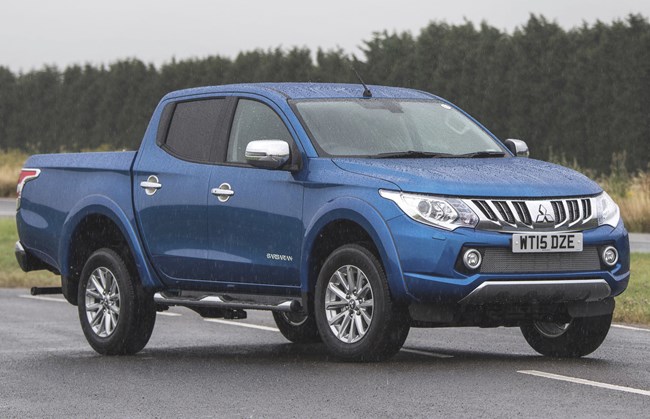 The first generation Mitsubishi L200 pick-up appeared in 1978 with the second generation making its UK debut in 1986, the third iteration in 1996, the Mk4 in 2005 and the all-new fifth generation we look at here from 2015 to 2019. At this point a substantial facelift was hailed as the sixth generation, but its underpinnings were unchanged. With Mitsubishi leaving the European marketplace, this is the last L200 we will see, but since the UK always carried a decent share of European sales, there are quite a few still around.

The L200 is powered by an all-alloy, four-cylinder, 2.4-litre common-rail turbo-diesel with two available outputs. It offers 150hp and 380Nm of torque or 180hp and 430Nm of torque. That additional torque will be a benefit if you tow frequently – it will readily tow 3.1t and from 2018 Mitsubishi gave it a 3.5t towing capacity, but only with tri-axle trailers, so some dropside and plant trailers will give you full scope.

Both engines are available with a six-speed manual transmission or five-speed automatic. Go for the Shogun-donated Super-Select 4WD, which is standard on all but basic 4Life models. It allows you to run in permanent four-wheel drive for towing or winter roads, fully locked four-wheel drive in low ratio for proper off-road work and disconnected front drive shaft for better miles per gallon. You’d have to buy two Volkswagen Amaroks to get all that!

The L200’s 3.0m wheelbase and 5.2m overall length gives it a load bed length of 1.85m with the four-seat, two-door extended cab version, and a 1.52m load bed in the five-seat, four-door double-cab derivative. Both offer load widths of 1.47m and will carry the expected 1.0t of payload.

Be aware, however, that certain models can only just break through that 1000kg barrier, so avoid blinged-up versions aimed more at private buyers than tradespeople.

The model mix allows you to go from basic essentials through to pretty much luxury levels. Titan models include rear privacy glass and dual-zone air conditioning, the Warrior trim adds satnav, xenon headlights and a rear bumper step, while the range-topping Barbarian includes leather trim. All have Bluetooth and later models have DAB radio as well.

Reliability is a given, with the only issues central door locking, the odd gripe about rear dampers and the longevity of the cab trim. Overall, the L200 definitely deserves its loyal following. My caravan-towing neighbour has a Mitsubishi Shogun, his fourth successive model in 20 years. That says more than a JD Power survey recommendation ever could.

So, does it make sense to buy one now Mitsubishi has effectively pulled out of Europe? The dealer network will continue to offer service and parts for a while – and, like all Japanese makes, there are plenty of specialists. Of course, the fifth generation L200 was also sold as the Fiat Fullback, identical in all but badges, so speak to your local Fiat Professional dealer as well while prices have fallen in your favour. It is a gamble, yes, but it’s also your last chance.