An influx of electric vans is set to transform the large van market in the coming year. 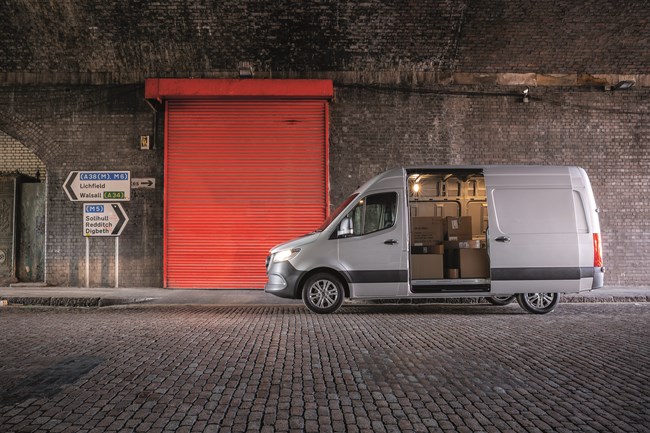 The impact of lockdown measures to suppress the spread of the Covid-19 pandemic saw the number of registrations in the 2.5t–3.5t van segment fall by 16.5% to 190,851 in 2020, despite strong demand for online shopping deliveries.

The star performer in the large van sector last year was the Mercedes-Benz Sprinter, which was the second most popular LCV overall with 23,506 sales, ahead of the third-placed Ford Transit with 21,724. Once again, the Ford Transit Custom medium van was the UK’s best-selling van.

The Sprinter and the Transit were a long way clear of the third, fourth and fifth best-selling large vans – the Peugeot Boxer, Volkswagen Crafter and Citroen Relay.

The third quarter of 2020 saw the long-awaited arrival of the electric iteration of Mercedes’ large van.

The eSprinter comes with a 114hp electric motor, and in official WLTP testing can achieve a driving range of up to 96 miles when fitted with an optional 50mph speed limiter, or 83 miles with the standard 74mph limiter.

There is a choice of two different maximum DC charging speeds. The 20kW version can be charged from 10% to 80% in two hours, while the 80kW version takes 30 minutes.

An even more recent electric arrival is the Maxus eDeliver 9, which comes hot on the heels of the brand’s new large diesel van, the Deliver 9, which debuted in June 2020.

The Deliver 9 is powered by a 2.0-litre turbodiesel engine with 163hp and 375nm of torque, married to a six-speed manual gearbox. It is up for grabs with front or rear-wheel drive, and all derivatives include electric power steering and autonomous emergency braking.

According to Maxus, a manual DPF regeneration button ensures the van can run at optimum levels, even when confined to urban assignments, by cleaning the particulate filter.

Two vehicle lengths are available – a medium wheelbase model with a cargo volume of 9.7m3 and a long wheelbase version offering 11m3. Payloads are up to 1,700kg.

Continuing the plug-in theme, Ford has revealed details of its E-Transit, although it is not expected to come to market until 2022. It will feature a 269hp motor driving the rear wheels and will have 67kWh of battery capacity, with an estimated driving range of up to 217 miles on the WLTP cycle.

Charging speeds will be up to 115kW with a compatible DC charger, allowing a 15% to 80% charge in around 34 minutes, while an on-board 11.3kW charger will allow a 100% charge in just over eight hours.

With the battery located under the body, Ford says the E-Transit will provide 15.1m3 of cargo space – the same as a rear-wheel drive diesel Transit – while targeted payloads are up to 1,616kg for a panel van and 1,967kg for a chassis cab.

In November 2020 Ford launched a 5.0t Transit, available as a panel van or chassis cab, with a payload of up to 2,383kg for the former and 2,558kg for the latter with a factory-fitted flatbed.

Ford hopes the new model’s 300kg payload advantage over the 3.5t Transit will appeal to customers seeking a heavier-rated donor vehicle for conversions, including tippers, ambulances, police vans and minicoaches.