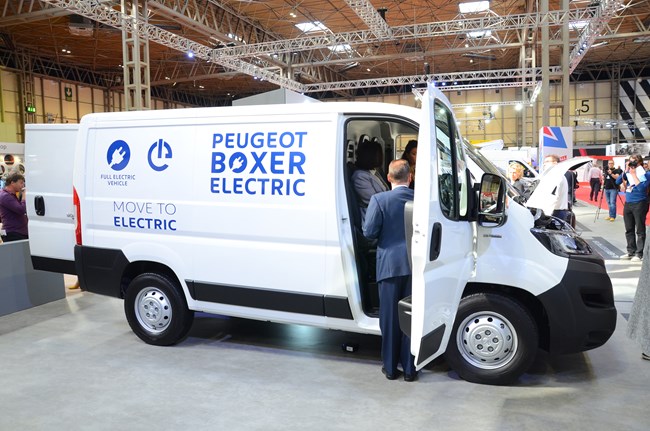 The PSA Group revealed electric versions of the Citroen Relay and Peugeot Boxer vans at the CV Show, having made a commitment to offer plug-in hybrid or electric versions of all new vehicles starting in 2019, with electrified variants of each model to be available by 2025.

The large vans are built at the Sevel factory in Val di Sangro, Italy and converted by partner BD Auto. The models on the stand in Birmingham were H1L1 panel vans.

Martin Guerney, PSA director of Fleet and Used Vehicles, said the launch of the electric vans fills what would have been a missing link in the brands’ line-ups with rivals, such as Renault, VW and Iveco entering the market for large plug-in vans.

He said the Relay Electric and Boxer Electric chassis could provide the bases for conversion bodies and claimed they offer payloads of more than 1,200kg, compared with just over 1,400kg for equivalent diesel vans.

Guerney said the large plug-in models would go on sale before the end of 2019 with electric derivatives of the Citroen Dispatch and Peugeot Expert to appear next year.

He claimed sales of the conventional diesel variants of the medium vans had grown 15% year-on-year in the first quarter of 2019 in a market up 8% overall.

Making their first appearances at the CV Show were the Citroen Berlingo and Peugeot Partner, winners of both the What Van? LCV of the Year and the International Van of the Year prizes alongside stablemate the Vauxhall Combo.

PSA will stop producing the 1.6-litre Euro 6.1 versions of the vans at the end of May to complete the transition to the Euro 6.2 1.5-litre diesel.

Helen Lees,  PSA’s head of Electric Vehicles, Connected Services and B2B Communications, said when it comes to LCVs, Citroen and Peugeot are focusing on electric rather than hybrid solutions.

“PSA believes electric is better suited to commercial vehicle customers, it has a guaranteed environmental benefit,” she said.

Lees added the Relay and Boxer Electrics will have a range of 169 miles in long-wheelbase form and 141 miles in short-wheelbase due to the difference in their respective battery packs.

She explained that while there is a “trade-off” when it comes to payload for the EVs, load volume is not affected unless you want to store a spare wheel underneath the van where the battery is fitted. If a spare wheel is required, it has to go inside the load box.

Lees said Peugeot had now supplied 160 Partner Electric vans to the Royal Mail, with the 100 delivered last year complemented by a further 60 in the first quarter of 2019.

When encouraging the adoption of electric vans, she stressed the importance of fleets trialling the vehicles to ensure they are compatible with their operations.

“The worst thing we can do is sell EVs to people they’re not suitable for,” she said.

Lees said PSA’s long-term plan is to bring the development of battery technology in-house for greater flexibility and told What Van? an announcement would be made on this next year. Currently the batteries for the Berlingo and Partner Electric vans are produced with Mitsubishi.

Lees said the goal is to drive down the cost of electric vans until their take-up is not dependent upon government grants and emission-charging fees.

“With ULEZ it becomes a financial no-brainer in London,” she said, before adding:

“We need electric vans to work outside of congestion charging zones in terms of cost.”