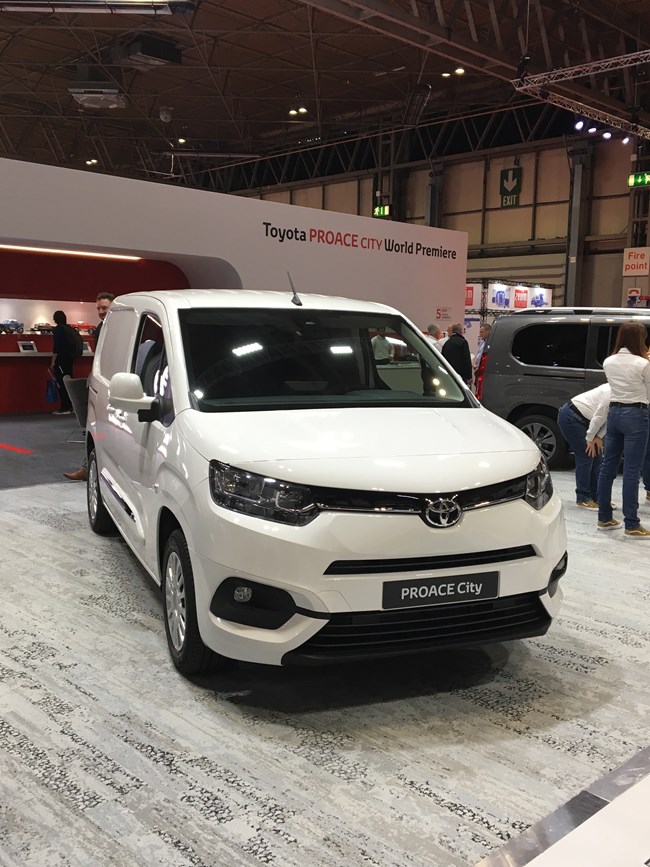 Pride of place on Toyota’s stand at the NEC went to the Proace City, the brand’s debut light van, which is based upon the PSA Group platform that produces the Citroen Berlingo, Peugeot Partner and Vauxhall Combo.

Like its stablemates, the Proace City, which will go in sale in the first quarter of next year, will come in two lengths – short at 4.4m and long at 4.7m. The long version will also be marketed as a crew cab.

Toyota has not confirmed engines yet but if the Proace City follows its PSA counterparts, it will be powered by a range of petrol and diesel engines with a spread from 75 to 130hp, and with a choice of five or six-speed manual or eight-speed automatic transmissions.

Following the withdrawal of the Hiace in 2011, UK LCV boss Gareth Matthews says the Proace City is the brand’s next step back into the van market on a journey that started in 2016 with the launch of the Proace medium van and continued with the development of an approved conversion programme. It also introduced the “no nonsense” Base 4x4 Land Cruiser LCV in 2018 at the NEC and at this year’s show it unveiled the Active trim, with features such as alloy wheels, sat nav and a more comfortable interior in response to customer demand for a higher specification option. The Active version will go on sale later this year.

Matthews told What Van? the brand would like to enter the large van sector in the future but needed to consolidate its existing product first.

As for the Proace City, he said: “We want to look at profitable opportunities, not volume at any cost. We want the right vehicle at the right cost.”

He anticipates a core customer base of small businesses blended with sales to individuals and larger fleets but with low margin contract hire and rental deals avoided.