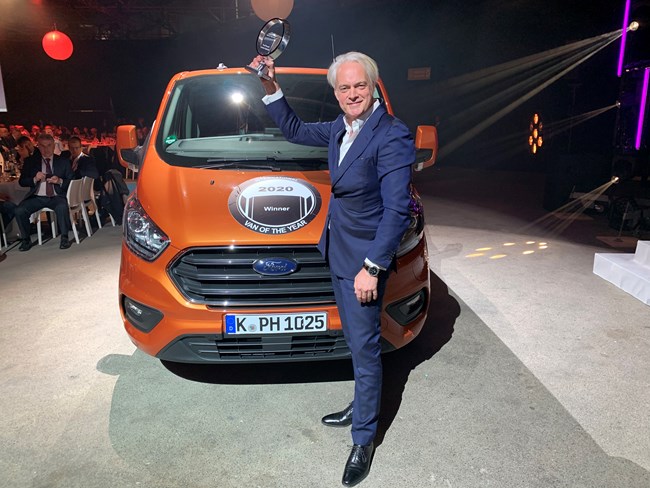 Ford has achieved a double success by winning the International Van of the Year (IVOTY) contest and International Pick-Up Award (IPUA) for 2020.

The new plug-in hybrid and mild hybrid versions of the Transit Custom medium van collected the van prize, while the Ranger has secured the pick-up award.

The IVOTY jury of journalists from across Europe chose the Transit Custom Plug-In Hybrid and EcoBlue Hybrid ahead of Ford’s own larger Transit EcoBlue Hybrid, which came in second place, while the Volkswagen Transporter T6.1 came third.

Other vans on the shortlist were the Renault Master, Iveco Daily and Fiat Ducato.

IVOTY jury chairman Jariath Sweeney said: “The jury appreciated the direction that Ford has taken to develop a viable drivetrain alternative that meets both urban and rural requirements in a most eco-friendly fashion.

“Its plug-in hybrid system is zero emission capable, with no range anxiety, has no compromise on payload or load volume and has a simple recharging regime.

“Basically the technology is designed to run on electric power for city trips – to help improve local air quality. No other manufacturer has gone down this alternative route, as yet.”

"Van operators need practical and efficient electrified vehicles that are tailored to their business needs, and our new Hybrid Transits offer a range of solutions to suit different customer use cases."

In the pick-up contest, the Ranger fought off competition from the second-placed Mitsubishi L200, with the Toyota Hilux coming in third.

The Nissan Navara was also shortlisted.

Sweeney said: “Jury members adjudged the Ranger to be the best all-rounder and noted that it’s a best seller too, as the previous version together with this revised model dominate the European marketplace.

“Marks were allocated on each vehicle based on powertrain efficiencies, load volume and capability, driver and passenger comfort and safety aspects, as well as low total cost of operation from a business point of view.”