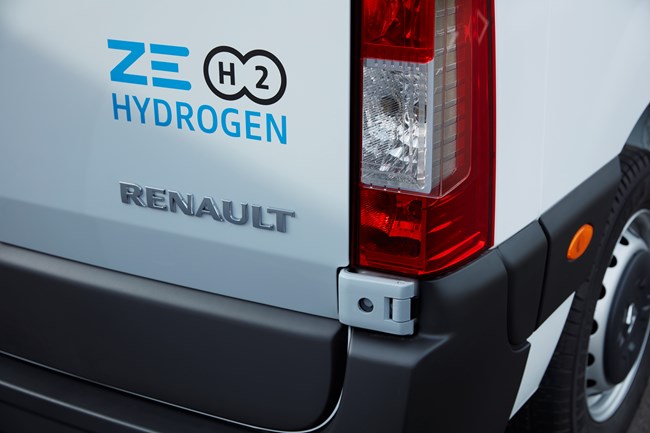 “We are trying to understand where the trends are going,” he said.

The hydrogen-powered Kangoo is expected to arrive before the end of the year with the Master following in mid-2020.

The vehicles will be equipped with a range extender fuel cell providing electric and thermal power of 10kW, which Renault claims increases the ranges of the Master Z.E. Hydrogen and Kangoo Z.E. Hydrogen by three times compared to the 100% battery electric derivatives. The manufacturer says the hydrogen-powered Master will have a range of 350km (217 miles) while the Kangoo’s range will be 370km (230 miles).

The generation of thermal power means the use of heaters in cold weather does not reduce range capacity, according to Renault, which adds the vans can be fully charged within 10 minutes.

“These vehicles provide professionals with all the range they require for their long-distance journeys as well as record charging times,” said Le Vot.

“And the advantages do not stop there,” he added.

“Master Z.E. Hydrogen and Kangoo Z.E. Hydrogen can run on decarbonised energy that respects the environment while offering all the comfort of electric driving.”

With two hydrogen tanks fitted beneath the van’s body, Renault claims the Master range’s load volumes are not compromised and stretch from 10.8m3 to 20.0m3. Payload is reduced by 200kg compared to the diesel equivalents.

The Master Z.E Hydrogen will be available in two lengths and two heights and in two panel van and two chassis cab bodies.

The Kangoo Z.E. Hydrogen is available as the long-wheelbase Maxi only with a load volume of 3.9m3. This is 0.2m3 less than the diesel equivalent on the current generation Kangoo due to the hydrogen tank being fitted inside the load area.

While a limited charging infrastructure currently restricts the adoption of hydrogen powered vehicles Renault says the fuel is suited to “captive company fleets” that can charge up at the available stations. The manufacturer acknowledges that substantial government backing is needed to increase the number of charging stations, which cost around 1m euro (£860,000) each to develop.

Across Europe 125 hydrogen charging stations are in operation with 14 of these in the UK, Renault said.

Renault developed its hydrogen technology in partnership with Symbio, a subsidiary of the Michelin Group.

Despite offering petrol-electric hybrid technology in passenger car line-up, Renault told What Van? it has no plans as yet to extend this technology to its LCVs.