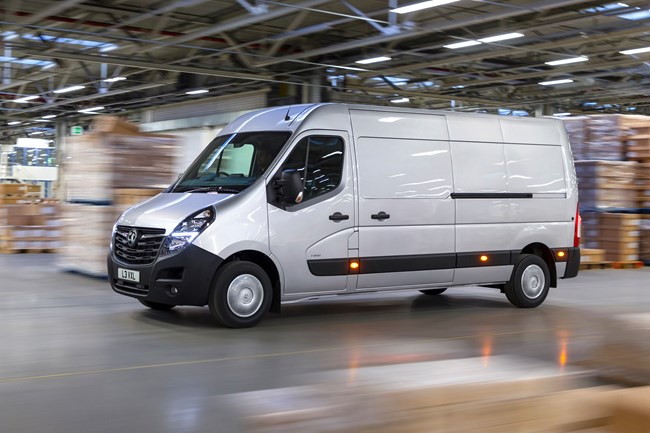 Vauxhall has released the first images of a revised version of its Movano large van, due to go on sale this summer.

It will be available in four lengths and three heights, with a maximum payload of 2,110kg and maximum cargo capacity of 17m3, meaning in certain configurations it can transport up to five euro pallets.

Vauxhall says 150 different versions of the Movano will be available, allowing for numerous conversions for specialist requirements.

Among the newly available features with the revised model will be a rear vision camera system, giving a live feed to a 7in touchscreen.

This will come as standard, as will a lane departure warning system.

A blind spot monitoring system and side wind assistant will also be available.

Available options will include comfort seats for the driver and passengers with adjustable lumbar support, with an air-cushioned driver’s seat also available.

LED lighting has been added to the cargo area, as have new handles on the side walls and pillars.

Orders will open in June, with the model in showrooms in September.

This will be the last Movano to be based on the Renault Master as part of an arrangement between Opel/Vauxhall and Renault that has existed for 20 years.

The PSA Group bought Opel/Vauxhall in 2017 and has announced it is to start building Peugeot, Citroen and Opel/Vauxhall large vans at its factory at Gliwice in Poland by the end of 2021.

Currently the group builds the Peugeot Boxer and Citroen Relay at the SevelSud plant in Italy alongside the Fiat Ducato as part of the Sevel Partnership between PSA and Fiat Chrysler Automobiles (FCA).

Earlier this year PSA announced this deal had been extended until 2023 – but said it would need to increase manufacturing capacity to assemble its large vans in the medium term, with SevelSud having exceeded its capacity.

The group says the Gliwice plant will be refitted to produce up to 100,000 large vans per year.