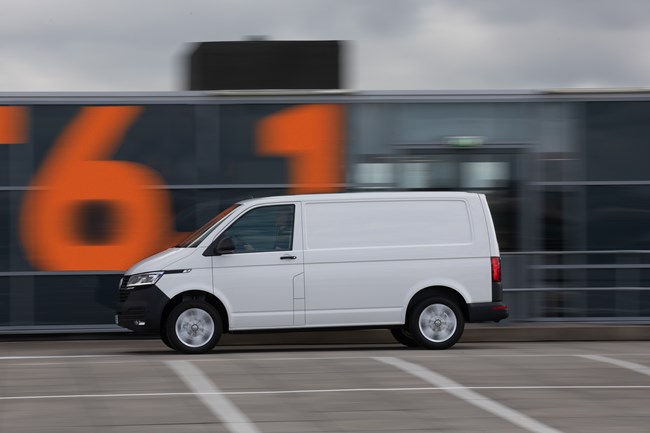 Volkswagen Commercial Vehicles has revealed prices for its revised Transporter, which it refers to as T6.1, before the medium van arrives in the UK’s showrooms in January 2020.

Prices for the panel van (all prices listed exclude VAT) will start from £21,635 for the entry-level T26 (denoting GVW of 2,600kg) Startline 90hp short wheelbase (SWB) and rise to £36,915 for the 199hp T32 Highline long wheelbase (LWB) with DSG transmission and 4Motion all-wheel drive.

The T26 is available in SWB only but the T28, T30 and T32 are offered in both SWB and LWB with a high-roof option available on LWB models.

Power still comes from a 2.0-litre turbo diesel engine but outputs have been increased slightly in the lower-powered units (from 84hp and 102hp) and lowered marginally (from 204hp) in the highest-powered one in the upgraded Euro6d-Temp-compliant versions.

The range now comprises 90 and 110hp engines wedded to a five-speed manual gearbox, a 150hp engine with a six-speed manual and 150 and 199hp drivetrains coupled with the seven-speed DSG dual clutch transmission. All these engines are single-turbo apart from the twin-turbo 199hp version.

The all-wheel drive 4Motion T6.1 is up for grabs with the 150hp unit married to the six-speed manual and with DSG when paired with the 199hp engine.

VW said it expects the T28 SWB van powered by the 110hp engine to be the best seller in the revised line-up.

As previously stated, a battery-electric Transporter developed in partnership with ABT will arrive in the first quarter of 2020 but VW has dropped the petrol derivative due to a lack of customer demand.

The T6.1 has inherited the electro-mechanical steering the manufacturer introduced on the Crafter large van two years ago, which enables a host of driver-assistance features, such as lane-keeping assist, park assist, crosswind assist, trailer assist, traffic sign recognition and an enhanced adaptive cruise control system that when combined with DSG transmission can bring the van to a standstill.

New with the T6.1, which is getting the technology at the same time as the Passat and Golf passenger cars, is an integrated SIM card (eSIM), which opens up a range of online functions via the We Connect connectivity package, including the eCall emergency call system, breakdown call, service scheduling and parking position reminder.

Sadly for panel van customers VW admits the 9.2in touchscreen that comes with the new voice-controlled  ‘Hey Volkswagen’ function will only be available with people-carrier versions of the T6.1, so you’ll have to make do with 6.5 or 8.0in screens.

UK customers will also miss out on the new load-through hatch underneath the passenger seat, adding an extra 400mm, which is restricted to left-hand drive models.

The manufacturer said full vehicle specifications, including payload data, will be released in November when UK order books officially open.