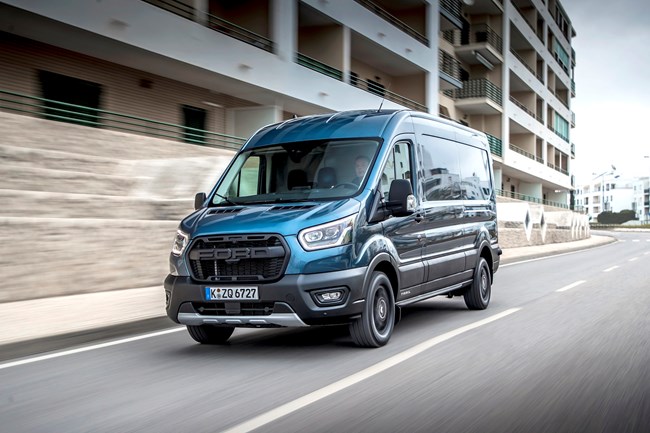 Ford has revealed details of traction-enhanced additions to its Transit and Transit Custom ranges.

Set to arrive in showrooms this summer, the new Transit Trail and Transit Custom Trail models have been designed to operate in tough working environments, with the enhanced traction of a new mechanical limited-slip differential (mLSD) on front-wheel drive Transit and Transit Custom variants, and Intelligent All-Wheel Drive offered on rear-wheel-drive (RWD) Transit.

In addition, Ford says new Active variants of the Transit Custom and passenger-carrying Tourneo Custom will feature extra body cladding and the option of an mLSD for enhanced traction on loose, slippery or soft surfaces, while an SUV-inspired exterior aims to add visual appeal.

The range of Active models will be further expanded later in 2020, with the introduction of the Transit Connect Active and Tourneo Connect Active.

“The Active and Trail models demonstrate how versatile and capable the Transit range can be,” said Hans Schep, general manager, Commercial Vehicles, Ford of Europe. “From businesses that operate off the beaten track to families who want a vehicle as adventurous as they are, there is a Transit to suit every need.”

Trail variants feature oversized Ford lettering in the matte black grille with additional black cladding around the front and rear lower bumpers and side panels, complemented by 16-in alloy wheels and Trail logos on the front doors. The Transit Custom can also be specified with roof rails and running boards.

Developed in partnership with driveline technology specialists Quaife, the mLSD automatically transfers engine torque in low grip conditions to the wheel with the most traction, allowing Trail models to more ably tackle surfaces like unpaved roads and gravel tracks.

The vehicle’s electronic stability control system has been recalibrated to work with the mLSD. This technology has previously been used to enhance the traction and handling characteristics of Ford performance models including the Focus RS, Fiesta ST and Focus ST, and has no impact on CO2 emissions or fuel efficiency, according to the manufacturer.

Intelligent All-Wheel Drive on the RWD Transit Trail boosts the base RWD configuration by sending up to 50% of engine torque to the front axle gauged on available grip in response to changing road surfaces and driver inputs.

Both the Trail and Active ranges are powered by Ford’s 2.0-litre EcoBlue diesel engine with a choice of 130, 170 and 185hp power outputs.

Ford also offers its EcoBlue Hybrid powertrains with all outputs, with which 48-volt mild hybrid technology recovers energy during deceleration, stores it in a battery pack, and uses the energy to increase fuel efficiency.