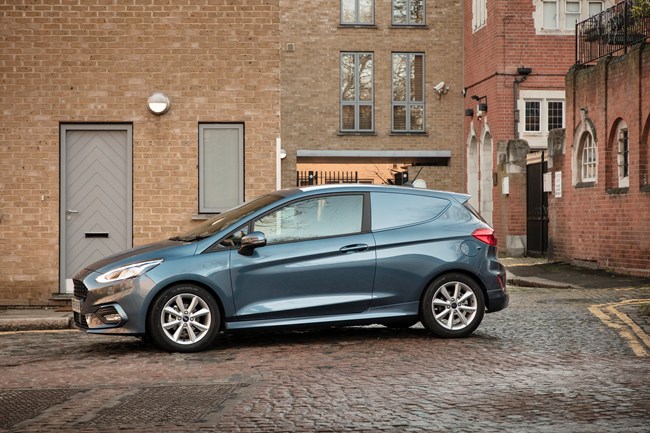 Ford is to introduce mild hybrid technology to its Fiesta Van range in August.

The hybrid model gets Ford’s 125hp 1.0-litre 48-volt EcoBoost petrol powertrain and is designed to deliver “responsive petrol engine performance and reduced cost of ownership for urban hatchback van owners and operators”, according to the brand.

It claims the mild hybrid system does not reduce the Fiesta Van’s 1.0m³ load area or 531kg payload.

The hybrid Fiesta Van’s powertrain features technology similar to that introduced to the Transit Custom EcoBlue Hybrid in 2019.

A belt-driven integrated starter/generator (BISG) in place of the standard alternator enables recovery and storage of energy usually lost during braking and coasting to charge a 48-volt lithium-ion air-cooled battery pack.

Ford says the BISG extends the range of the van’s auto start-stop technology to deliver greater fuel savings, including when coasting to a stop below 15mph and when the vehicle is in gear with the clutch pedal depressed.

The BISG also acts as a motor, integrating with the engine and using the stored energy to provide torque assistance during normal driving and acceleration, as well as running the vehicle’s electrical ancillaries.

The technology contributes to fuel efficiency of up to 68.8mpg and CO2 emissions from 93g/km on the NEDC cycle (55.3mpg and 115 g/km WLTP) – an improvement of up to 6% compared with the non-hybrid model, Ford claims.

The manufacturer adds that the hybrid powertrain also features cylinder deactivation technology to further enhance fuel efficiency by automatically switching off one of the cylinders when full capacity is not needed, such as when coasting or cruising.

The Fiesta Van EcoBoost Hybrid is available in both the Trend and Sport series and replaces the 85hp 1.5-litre TDCi powertrain option.

A non-hybrid 125hp 1.0-litre EcoBoost with six-speed manual transmission is also available, with fuel efficiency of up to 67.2mpg and CO2 emissions from 97g/km NEDC (54.3mpg and 119g/km WLTP).

Ford has not released pricing for the Fiesta Van EcoBoost Hybrid yet but the passenger car version is available from £19,860 (including VAT).