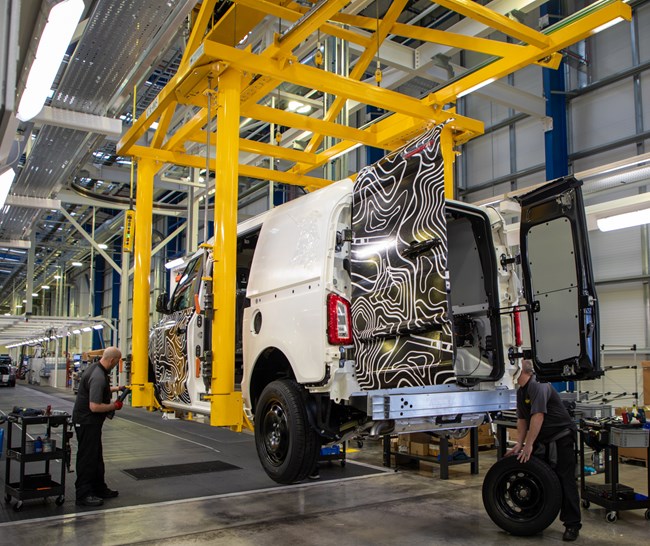 The first prototypes for LEVC’s hybrid van are now being built at the company’s Coventry factory, where it also builds the new London taxi. The van is due to launch near the end of 2020.

The van is based on the same architecture as the new TX London taxi, which means it can travel 80 miles on electric power alone, after which a 1.5-litre petrol engine cuts in as a range extender generator to charge the battery on the go. Being based on the London taxi, the 1.0t van has a turning circle of just 10.1m, making it ideal for city deliveries, according to LEVC.

The prototypes being built now will be deployed as test vehicles for homologation, durability testing and crash testing.

The LEVC van was originally supposed to launch in 2019, but was delayed. It will now make its public debut at the Commercial Vehicle Show in April and should be launched in the fourth quarter of 2020.

Joerg Hofmann, CEO of LEVC, commented: “Prototype stage is an important milestone in our new electric van’s development process as we stay on track towards full production in Q4. This new van satisfies the growing demand for zero-emissions vehicles in the 1.0-tonne segment, currently dominated by diesel products, and combines this with extended mileage capability to totally eliminate any range anxiety. It’s an intelligent green mobility solution for any commercial vehicle operator.

“Using the proven TX e-City range extender technology, LEVC’s new van will set new standards in green logistics with 80 miles (130km) of emissions-free driving and an extended electrically driven total range of over 370 miles (600km). Owing to its flexible range, it offers a ‘distribution to door’ – not just last mile – service, providing the critical link between out of town depots and city centres.”