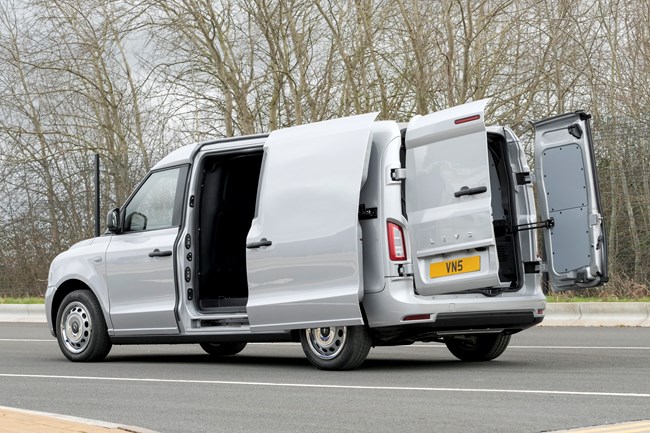 LEVC, the maker of TX London Taxi, has revealed that the 1.0t van based on the taxi will be called the VN5.

Like the taxi, the van uses a bespoke bonded aluminium architecture and is powered by a 147hp electric motor. With its 32kWh battery, it can go 63 miles on electric power alone. After that, a three-cylinder petrol engine kicks in as range extender. That means it does not drive the wheels, but instead charges the battery, allowing it to travel a further 240 miles on combined petrol-electric power.

LEVC positions the van as a ‘distribution-to-door’ solution. This means it is intended to be able to travel several times a day from a distribution centre outside of a large city to the city centre for deliveries. Thanks to the range extender powertrain, it should be able to drive on electric power alone within the city, with assistance from the petrol engine if needed.

To help with this brief, it can be charged in 30 minutes from a 50kW rapid charger. To ensure drivers have less trouble finding the right charger, the van is compatible with both major charging standards: CCS Type 2 and CHAdeMO.

It is called VN5 because VN stands for van, while 5 represents the 5m3 load volume. The van can carry two euro-sized pallets and has a gross payload of 800kg. The cargo area is accessed by 60/40 split rear doors, which can open over 180°.

Customers will also be able to specify one or two side doors (or none) that allow the two euro pallets to be loaded from the side.

LEVC hopes the VN5 will score on total cost of ownership thanks to 25,000-mile service intervals, no ULEZ charges, and relatively easy reparability thanks to plastic body panels.

The company will reveal prices at the beginning of April. So far, it has only said that the VN5 will be cheaper than the TX taxi, which costs from around £55,000, including VAT and the £7,500 plug-in taxi grant, although most taxis are leased. LEVC is confident the VN5 will be eligible for the plug-in van grant, which pays for 20% of the purchase price, up to a maximum of £8,000.