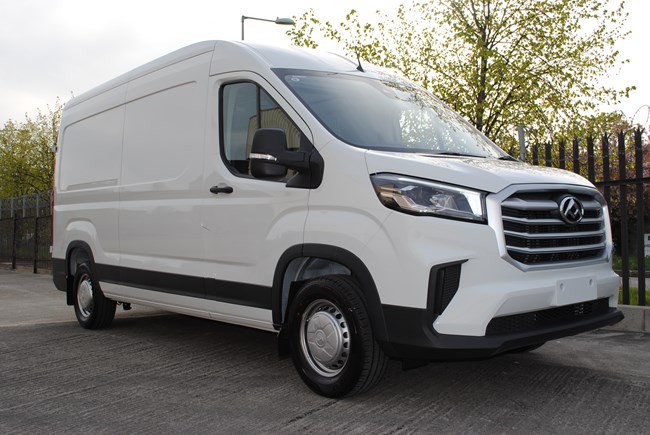 Maxus has taken the wraps off two new products: the Deliver 9 large panel van and the eDeliver 3 electric van.

The company, which rebranded from LDV in April and is owned by Chinese vehicle manufacturer SAIC, had intended to reveal the vans at the CV Show in April but Harris Group, its distributer in the UK and Ireland, switched to a virtual launch after the event was cancelled due to the Covid-19 pandemic.

A 2.0-litre turbodiesel engine with 163hp and 375nm of torque, married to a six-speed manual gearbox, powers the Deliver 9, which is up for grabs with front- or rear-wheel drive. All derivatives include electric power steering and autonomous emergency braking, while Maxus says a manual DPF regeneration button ensures the van can run at optimum levels, even when confined to urban assignments, by cleaning the particulate filter .

The cargo bay is accessed by rear doors opening to 260 degrees and load volumes range from 8.0m3 to 12.3m3, with payload capacity in the panel vans going from 1,110kg to 1,360kg. All versions have an unbraked towing limit of 750kg.

As well as a panel van, the Deliver 9 is also offered as a crew van, chassis cab and minibus.

It comes in two equipment grades, Standard and Luxury, the latter gets a 10in touch-screen-enabled infotainment system, which is optional in Standard trim, while Apple Car Play and Android Auto are also available. The Luxury model includes features such as mirror link, blind-spot monitors and keyless entry but both grades get aircon and rear parking sensors.

Maxus has not released the full Deliver 9 price list but, as an example, a long-wheelbase (LWB), high-roof, rear-wheel drive van costs £30,231, excluding VAT. Comprehensive emission and economy figures are not available yet either but ballpark figures for RWD models are 256g/km CO2 and 29.0mpg.  All Maxus LCVs come with a five-year, 125,000 mile warranty with five years roadside assistance.

Although Maxus sees both its new vans as game changers, the eDeliver 3 compact van could be more significant in the long run. It is the first electric-only van from a mainstream manufacturer to go on sale in the UK, where it will compete against the likes of the Renault Kangoo Z.E. and the Nissan e-NV200, both of which derive from ICE (internal combustion engine) models, as do all the others on the market.

Maxus claims the eDeliver 3 has a class-leading range of 150 miles on the WLTP cycle on a single charge of the larger of the two batteries (52.5kWh) offered. With the smaller 35kWh battery it can manage a claimed 110 miles.

The panel van comes in short- and long-wheelbase guises with load volumes of 4.8m3 and 6.3m3, respectively.

The LWB e Deliver 3 with the larger battery has a 990kg payload but with the smaller battery this increases to 1,020kg, which is not only higher than its electric van rivals but also all the diesel compact vans currently on sale too.

Maxus says the Deliver 3 can be fully charged in six to eight hours or DC fast charged to 80% of capacity within 45 minutes.