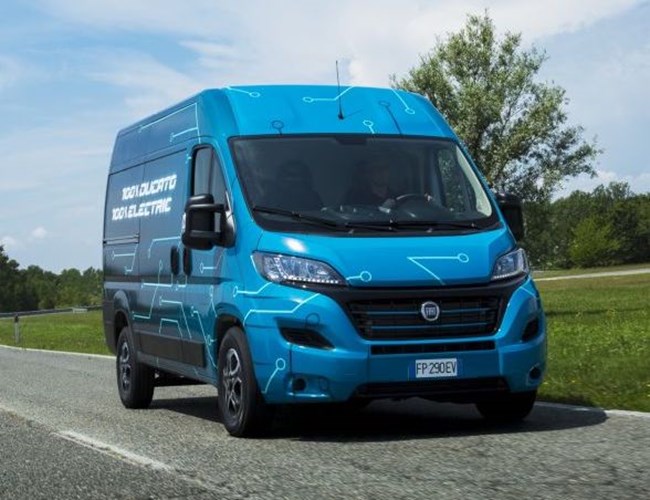 Fiat has confirmed UK prices and specs for the E-Ducato – the new electric version of its large van.

It is available to order now, initially as a panel van, priced from £47,675, excluding VAT and including the government’s plug-in van grant.

Chassis cab and passenger configurations will also join the range early next year, with the panel van and chassis cab versions available in a range of different vehicle lengths, heights and wheelbases.

All come with a choice of a 47kWh or 79kWh battery, both of which are paired with a 122hp electric motor.

The 47kWh battery allows a driving range of up to 120 miles on the WLTP city cycle, while the 79kWh battery can cover up to 192 miles.

AC or DC charging capability is available. With a 22kW AC charger, a 0-100% charge takes two hours 25 minutes with the 47kWh battery, and four hours with the 79kWh battery, while a 50kW DC rapid charger can take both batteries to an 80% charge in 30 minutes.

The E-Ducato comes with a regenerative braking system, which stores energy when driving downhill, and a choice of four driving modes.

There’s ‘normal’, which balances performance and economy; ‘eco’, which increases range by reducing acceleration and turning off the air conditioning; ‘power’, which ups the available grunt for full-load missions; and ‘turtle’, designed for extreme power saving when the battery is nearly empty.

All E-Ducatos also come with a 12-month subscription to Mopar Connect, including GPS emergency, theft and roadside assistance.

The first E-Ducato deliveries are expected in the final quarter of 2020.