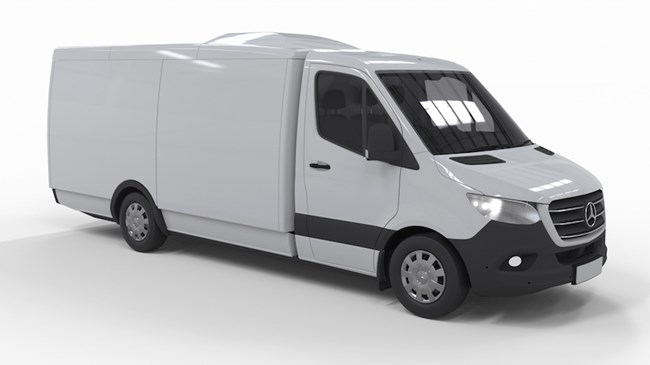 British engineering firm Penso is launching new ultra-lightweight, eco-friendly delivery bodies for 3.5t vans, which it claims increase payload capacity by up to 400kg compared to aluminium or steel bodies.

Built at its Coventry factory on the back of a £16.5m investment, half government-funded and half from Penso, the carbon-fibre bodies are built onto the chassis of MWB, front-wheel drive (FWD) Mercedes-Benz Sprinters but could be configured to other 3.5t models.

The firm opted for a FWD Sprinter because it offers a lower loading height than rear-wheel drive (RWD) and “future compatibility” for conversion to an electric drivetrain, although it has not ruled out adapting its technology to RWD in future.

Penso claims the lighter weight and aerodynamic design of its bodies (based on its experience in aircraft and motorsport design) deliver a 30% reduction in diesel usage against competitors and will increase battery range when mounted to electric chassis.

The Blue Ocean Home Delivery Pods are built for last mile deliveries and are initially available in two guises: the temperature-controlled e-Grocery Pod and the Luton-style e-Delivery Pod. Penso says both increase payload by up to 50% and load volume by up to 30% compared to existing bodies.

Daniel Hurcombe, Penso’s md, claimed: “A 3.5-t vehicle with a Blue Ocean Home Delivery Pod can carry the same weight of goods in two journeys that a traditional vehicle delivers in three.”

The manufacture of each pod includes 5,000 recycled plastic bottles wrapped in carbon fibre. The bodywork is compatible with diesel, hybrid and electric models, so can be easily transferred to next-generation vans, according to Penso.

It says the triple-compartment e-Grocery pod, which went into production in May, can carry 140 tote containers versus the industry average 110 to 120 and claims its payload of 1,250kg is 47% higher than the 850kg industry average for a 3.5-t van in this sector.

Its low floor negates the need for stepped access and the pod can be unloaded at the kerbside via passenger side doors.

With the GAH refrigeration unit running Penso claims the Sprinter e-Grocery Pod can achieve fuel economy of 34mpg on the urban cycle, a full 10mpg more than a traditional Sprinter fridge van.

Hurcombe said: “For a typical supermarket vehicle, that equates to a saving of around £2,400 per vehicle per year in diesel costs alone. Multiply that across a fleet of 3,000 home delivery vans and suddenly you’re saving £7,200,000 a year on diesel.”

The e-Delivery Pod will go into production in July. It has a load volume of 19m3, interior height clearance of 2.4m and a payload of 1,500kg, which is up to 500kg more than equivalent traditional bodies, says Penso.

The firm plans to build 1,000 bodies this year, ramping up to 10,000 annually by 2025. It will produce bodies for both left- and right-hand drive vans but insists the majority will be destined for UK customers, such as supermarkets, parcel delivery services and logistics fleets.

From the third quarter of 2020, it will launch pods including medium- and high-roof van body variants with a choice of single and double compartments, twin rear door and side door loading configurations and tail-lift options – customisable for temperature-controlled goods or dry freight.

Ultimately it aims to build 30 LCV body variants across different wheelbases and platforms.

The Blue Ocean Home Delivery Pods come with a 10-year structural warranty plus a three-year/150,000 mile warranty on moving parts. After a decade, Penso says 95% of the structure can be recycled.