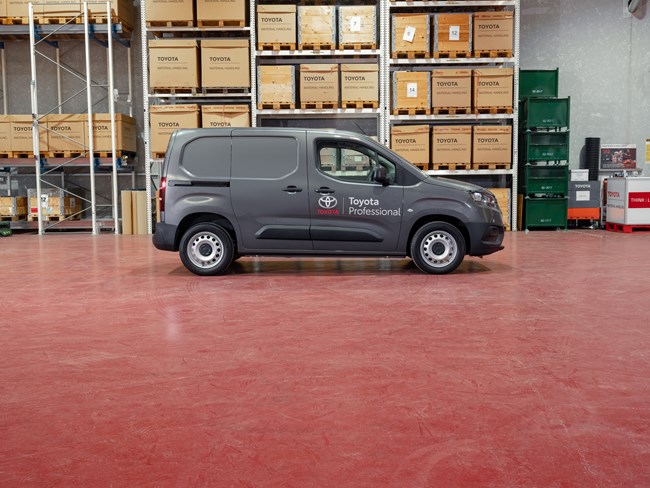 Toyota Professional claims the launch of its Proace City compact van this month will result in the brand having a presence in 80% of the LCV market.

The Proace City has been developed in collaboration with the PSA Group and is based on the same platform as the Citroen Berlingo, Peugeot Partner and Vauxhall Combo.

With its current line-up of the Proace medium van, which is also built on a PSA platform, Hilux pick-up and Land Cruiser Utility Commercial, which operates in the niche 4x4 segment, Toyota is competing in less than 40% of the European LCV market.

In the UK the Proace City will be offered in two lengths and with two 1.5-litre diesel engines with outputs of 75hp or 100hp. Both these powertrains come with five-speed manual gearboxes and stop/start.

For now at least, Toyota has opted not to offer the more powerful 1.5 130hp unit that is available in the PSA vans with six-speed manual or eight-speed automatic transmission.

The Proace City comes in a five-model line-up with two equipment grades. Both the entry-level Active versions are short-wheelbase with the 75hp van priced from £18,386 (all prices exclude VAT) and the 100hp priced £19,011.

Five body lengths are available across the Proace City and Proace medium van ranges and Toyota Professional’s UK boss Gareth Matthews claims this offers customers a comprehensive choice without any crossover in loading capacities between models.

The Proace City comes with a five-year warranty and five-year roadside assistance and Matthews claims it will deliver higher residual values than not only its PSA siblings but also the Volkswagen Caddy.

He says the Proace takes a 1% share of the medium van market and expects the Proace City to do the same in the light van sector.