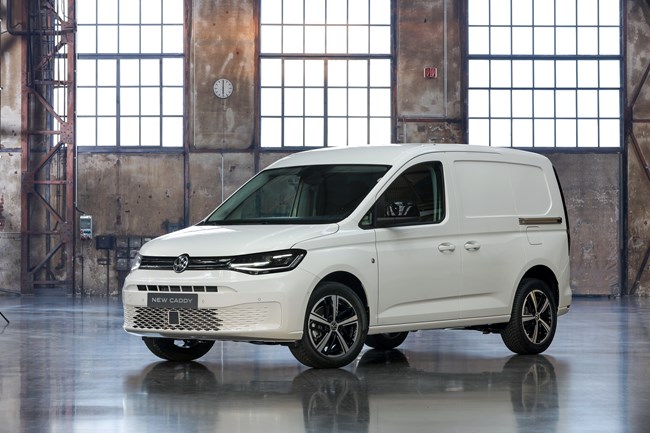 Volkswagen has unveiled the latest generation of the Caddy in Düsseldorf. Based on the same MQB platform as the VW Group’s Golf passenger cars, it offers the group’s latest engines and connectivity features.

Order books for the fifth generation of the light van open in October with first deliveries expected at the start of 2021.

The outgoing Caddy has been on the market in some form or another since 2003, so even though it has had a couple of heavy facelifts, it's high time for an all-new model.

As such, it’s no surprise that the new Caddy has grown considerably. The standard-wheelbase version now has a total length of 4,501mm, 93mm more than before. This results in a 73mm longer wheelbase, for a total of 2,755mm.

The longer wheelbase can also accommodate a longer, 840mm sliding door. The van has become 66mm wider, which results in an 11mm wider cargo bed and 50mm more width for cargo in total.

Even though the overall height of the van has decreased by 25mm, the usable cargo area is actually 7mm taller.

The Caddy Maxi, which will debut later, adds a further 215mm to the wheelbase and offers 2,150mm of total cargo length. It can now carry two Euro pallets.

Four engines will be important for the UK: one 1.5-litre petrol with 115hp and three 2.0-litre TDI diesel engines. Initially there will be a choice of 100hp or 120hp, with the third version to be announced later. All engines already comply with the Euro 6d emissions standards that will come into effect in 2021.

The lower-power engine gets a six-speed manual gearbox, while the higher-power engine can be optionally combined with a seven-speed dual-clutch automatic or all-wheel drive (but not both at the same time).

There are a number of equipment grades and versions: the standard panel van is called the Cargo, while the Estate gets passenger compartment windows. As before, the Caddy is also available in a number of passenger car configurations.

Inside, the new Caddy gets a lot of equipment from the Golf, such as the latest infotainment system options and an optional digital driver display. The basic Cargo gets front electric windows, an electric handbrake and a basic 6.5in infotainment system. Upgrades to an 8.25in or 10in screen are possible, as are various connectivity features.

All versions get ‘AGR Ergo’ seats, which have been approved by the German campaign for back health to be comfortable and ergonomic on long drives. They all feature adjustable lumbar support, for instance.