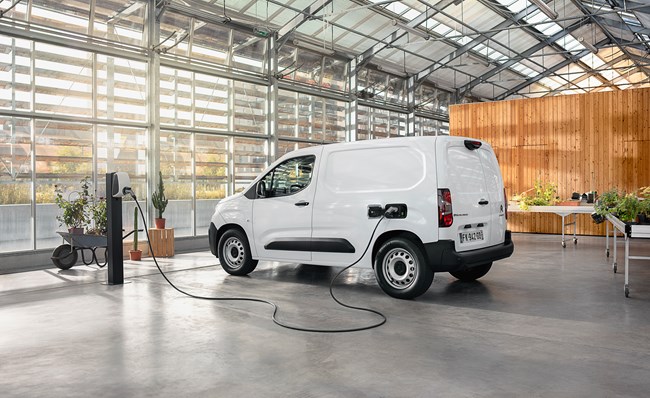 Citroen has revealed a new, 100% electric version of its Berlingo light van.

The e-Berlingo features a 136hp electric motor and a 50kWh battery pack, allowing a driving range of up to 171 miles on the official WLTP cycle.

Regenerative braking technology is fitted to maximise range, the effect of which can be increased at the driver’s choosing, and drivers will also be able to choose from three motor power modes, trading reducing performance for greater range.

Delayed charging functionality will allow operators to take advantage of off-peak electricity rates, while thermal preconditioning will allow the cabin to be warmed up while connected to the mains, rather than draining the battery. Drivers will be able to control these and other functions remotely with a smartphone app.

The e-Berlingo will be available as a panel van measuring either 4.40m or 4.75m long, or as a crew van.

Citroen says that because the battery is located under the seats of the vehicle, the van’s load capacity is not affected, with load volumes of up to 4.4m3 – space for two Euro pallets – while max payload is up to 800kg.

Two trim levels will be offered – Enterprise and Driver.

The e-Berlingo will arrive in UK dealerships in the fourth quarter of 2021. Prices are yet to be announced.